The first stone of the future "Tour Maraîchère" has just been laid in Seine-Saint-Denis. 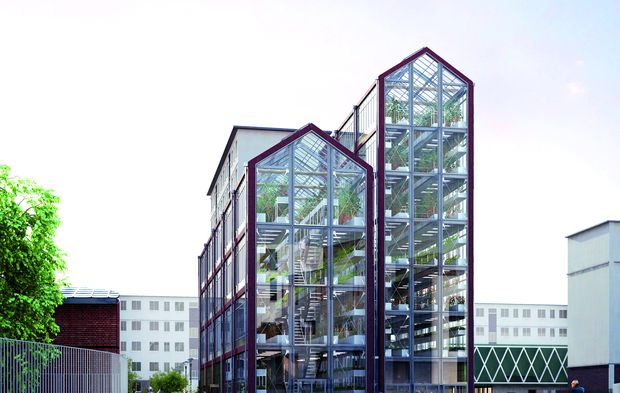 Country: France
The first stone of the future "Tour Maraîchère" has just been laid in Seine-Saint-Denis. The project consists of two vertical greenhouses, which will reach up to 6 storeys. They must produce up to 12 tons of fruits, vegetables every year.
It has been announced since February 2016: a tower 24 meters high where will be produced each year several tons of fruits, vegetables or mushrooms. And the construction began, since the foundation stone of the "Cité maraîchère" was raised Friday, September 14, 2018, in Romainville (Seine-Saint-Denis). This large-scale urban agriculture project, designed by the architects ilimelgo (agent) and jerks (associate), should see the day in 2019.

Presented by the socialist municipality as a project "unique in France", the market garden will consist of two "vertical greenhouses" of three and six floors. It will be located in a neighborhood requalified by an urban renewal program, in this town of 25,000 inhabitants located three kilometers east of the capital.

An estimated cost of 5 million euros

The site, whose cost is estimated at 5 million euros, will house a farm that aims to produce 12 tons of fruits, vegetables, mushrooms, edible flowers, plants and seeds. There will also be a center of awareness and training in urban agriculture for the general public and professionals, and living spaces (coffee-canteen, grocery ...).

"By reintroducing market gardening activity in Romainville, we first wanted to give back to the city, which has long been a market gardening place, a vocation for a feeder city, but we will also generate a new economic activity creating employment and including employment insertion, "said the mayor Corinne Valls by laying the foundation stone in the presence of Patrick Ollier, president of the Metropolis of Greater Paris.

The "Cité Maraîchère", which defends the idea that market gardening in city centers and peri-urban areas must become a complement to traditional agriculture, also intends to become a "living laboratory" for urban agriculture projects "called to develop "in the future metropolis of Greater Paris.

Agriculture is expected to decline in Western Europe in the next decade, according to forecasts by the OECD and FAO (Food and Agriculture Organization of the United Nations). The Vegetable Market is perhaps the beginning of the answer.

7 reasons why transition to BIM is important for SMEs

BIM cuts work and unnecessary wasted time, allowing companies to get the most out of their projects

How to collaborate better in BIM projects?

If there are still no BIM standards in my country, what am I guided by?