‘My son can take a complex set of instructions from LEGO and build a 3,000-piece warship, so why can’t we do the same with BIM on our projects, since we’re skilled adults?’ 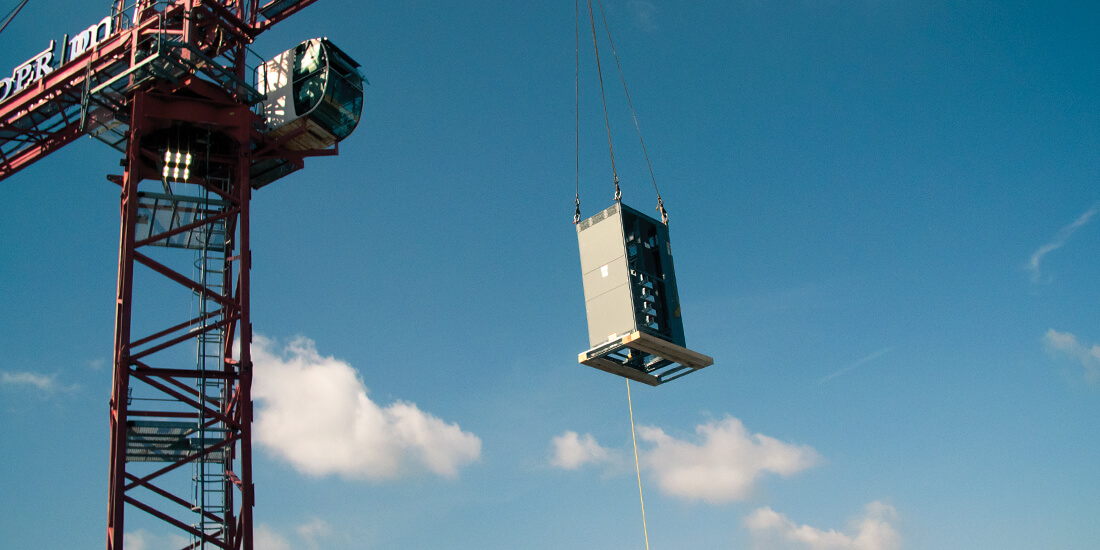 In the late 1990s, Apple launched its “Think Different” campaign, running ads on TV and emblazoning billboards with images of luminaries such as Alfred Hitchcock and Miles Davis. The campaign was a sensation, and the message signaled a broader shift in perspective: Just because things had always been done one way doesn’t mean that’s the only way.
The work of commercial electricians is famously difficult, even compared to the work of other trades such as fire suppression, plumbing, and HVAC. In traditional workflow, electricians are often the last tradesmen to arrive on-site, working around the complex, spaghetti-like systems installed by others. The old way of working is a recipe for change orders, last-minute clashes, and cost and schedule overruns.
So what if electricians could work differently—for example, being among the first workers on-site? To that end, Miller Electric has pioneered a new BIM-based approach to electrical design and installation. The Jacksonville, Florida–based company uses off-site prefabrication of relatively large electric modules, which are delivered to project sites on the very day—sometimes the very hour—they’re needed. 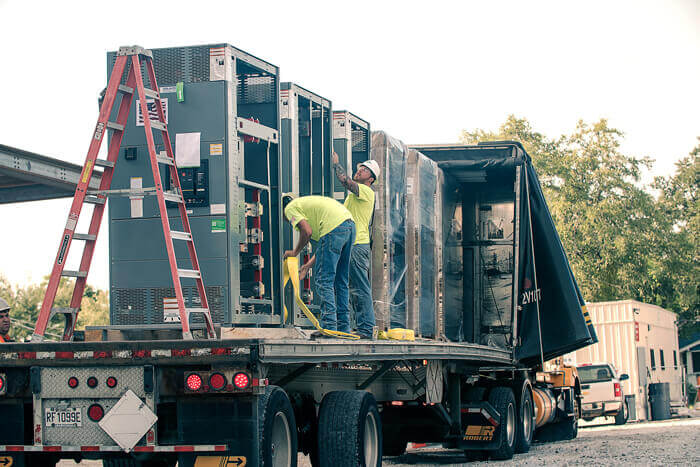 Getting there sooner—especially for large projects such as data centers, hospitals, and government buildings—has been a boon for efficiency and safety. “When we’re last, we’re dealing with trash and debris and congestion, basically a sloppy environment created by others, and that makes it unsafe,” says Alan Creel, Miller Electric’s vice president of preconstruction services. “For so many reasons, we really needed to get on jobsites earlier and control our own destiny.”

From last to first

This new workflow often means that Miller’s crews are first to arrive on finished floors, before other trades, so the large modules can be lifted by crane soon after delivery. “Being first instead of last makes all the difference in the world,” Creel says. “We’ve reduced rework and waste, are using less labor, and our safety numbers have steadily improved. We’re also securing more projects based on the improved performance.”

The benefits of this new approach were especially apparent working on Baptist MD Anderson Cancer Center, a nine-story, 600,000-square-foot facility in Jacksonville, scheduled for a mid-2018 opening. “This was a large, iconic building taking up most of a city block in a highly congested metro area,” Creel says. “There are many challenges on a project like this compared to, say, a data center. For one thing, there’s virtually no layout area for material storage, so we couldn’t count on that—even the construction workers have to park off-site. And adjacent sites and roads are busy, so crane time is tightly scheduled. To be successful on this important health facility, we had to work differently.”

“Working differently” began with early involvement in the design process, six months before the project was “shovel-ready” for construction. “Early involvement is always helpful,” Creel says. “On our industrial projects we get pushback on this, but in health care, owners seem to get it and are supportive of early engagement—they see the value.”

Early, but not too early. “The most value for us is when drawings are out, and we can start modeling immediately—that really helps with the large modules we prefer to prefab,” Creel says. “If we’re involved before that, the design is likely to change, so we spend time redesigning. So there’s a sweet spot for us.”

BIM as a Verb

“I told my team, ‘My son can take a complex set of instructions from LEGO and build a 3,000-piece warship, so why can’t we do the same with BIM on our projects, since we’re skilled adults?’” Creel says. “The 3D visualization is detailed, and our installation task is clear—it’s not as difficult as everyone makes it out to be.”

On this project, structural and architectural models provided a base for electrical design, and Autodesk Revit and Schneider Electric’s LayoutFAST Revit plug-in were used to design the large, modular assemblies. This included the underground conduit assemblies so vital to the safer, more efficient workflow achieved at Baptist MD Anderson Cancer Center.

“We couldn’t do this without Revit because it lets us create the building information model we need,” Creel says. “We’re not going to BIM anything that we don’t prefab, and we’re not prefabbing anything that hasn’t been BIM’ed. This allows us to completely model an area and then communicate visually about our expectations. When we have the building information model, our prefabrication now has a near 100 percent success rate, simply because the information is so good.” During this phase, Miller Electric met weekly with the general contractor and other trades, using the model and  BIM 360 Glue to resolve and nearly eliminate clashes.

The modular assemblies are prefabricated off-site in ideal conditions at a Miller Electric facility just 20 minutes from the cancer center project. “We’re actually building the building at a different time and in a different location and then spinning it to the jobsite and work packages,” Creel says. “Then the material is delivered in large pieces and pieced together like my son’s LEGO blocks.” 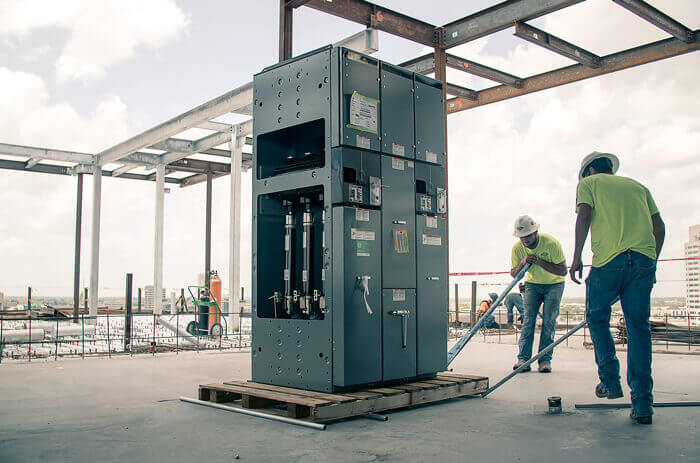 BIM work speeds up on-site work. Designers establish precise attachment points for field crews who use robotic total stations to lay out and mark these points when installing. Even big modules usually can be craned into position and installed within short time windows.

Miller Electric also uses a laser scanner for mid-project as-builts to verify provided modeling. “With the layout points and the total station, we can work directly from the model and don’t have to use tape measures. Ladder climbs are also reduced, which is safer,” Creel says. “And when we do precise as-builts, we’re often able to identify construction mistakes—such as a footer in the wrong place—in ample time to make corrections before we, or other trades, come in. We’re fixing things in real time, which is good for everybody.”

This BIM-enabled workflow, which makes early prefabrication of large modules possible, is so effective for Miller Electric that Creel can only identify one barrier to its widespread use. “The largest conflict we run into is lack of commitment from owners and other trades,” he says. “We’re changing the construction sequence for our benefit and everyone else’s, but not everyone has thought it out this way. So we continue to refine our message and publish the value we’re seeing—this is definitely change that needs to be more widely adopted.”

The Seven Deadly Sins of a Construction Director in Project Management

It is in the design phase that an engineering company, whether a Merger or Builder has the opportunity to reflect and evolve on