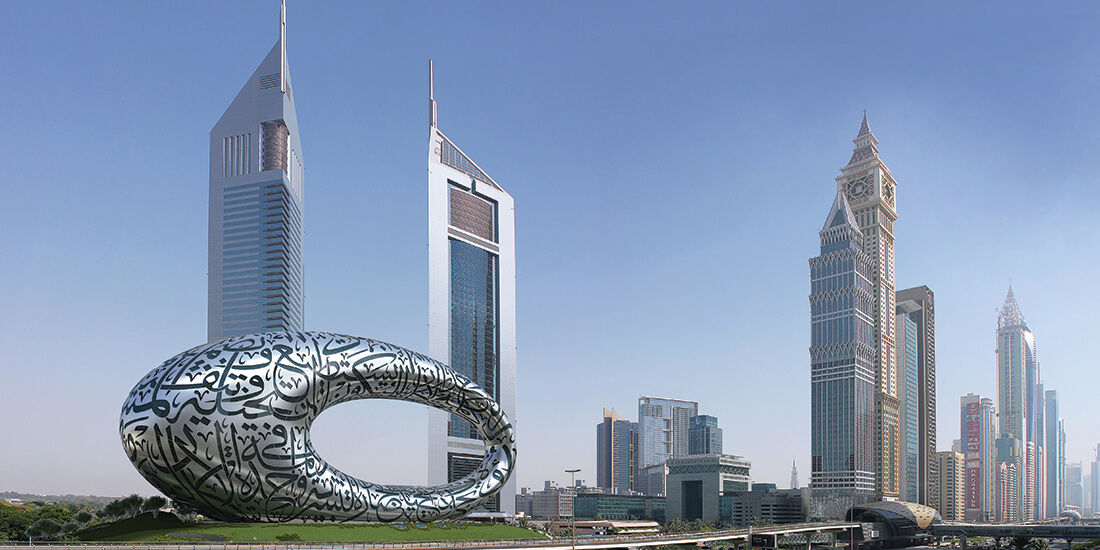 Dubai is rightly famous for its modern glass-and-steel skyscrapers, such as the unparalleled Burj Khalifa. Yet no matter how sleek and tall you make it, a skyscraper is still a traditional building form, with its familiar repetitions and verticality. Dubai’s new Museum of the Future, however, takes a groundbreaking approach to architecture and what it means to be a museum.
While there are certainly taller and more expansive buildings, this incredible feat of design, engineering, and construction will rank as one of the most complicated projects ever built. “A building with this complexity has never been done, not with this shape of the facade and the superstructure,” says Derek Bourke, BIM manager for construction firm BAM International.
Designed by Killa Design and scheduled to open in 2019, the museum will take a torus shape, a gleaming silver oval with an open center. The building looks almost like an eye keeping watch over this growing city, the largest in the United Arab Emirates (UAE). 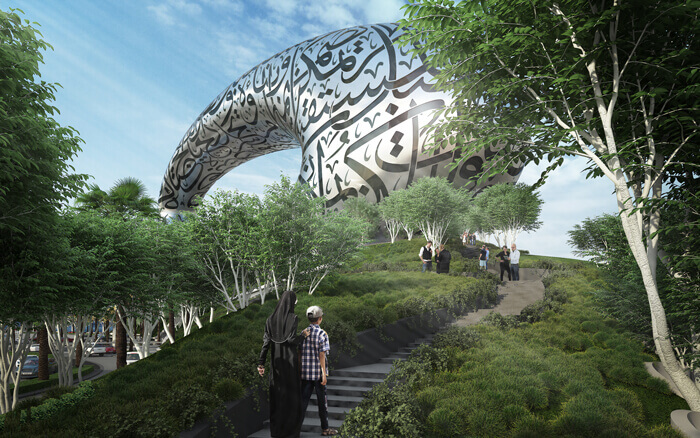 Art and metaphor were driving concepts in the museum design: The idea for the museum stemmed from His Highness Sheikh Mohammed bin Rashid Al Maktoum, vice president and prime minister of the UAE and ruler of Dubai, and it is intended to be an incubator for innovation and invention. (Its motto: “See the future, create the future.”) It’s not a typical museum, as in a repository of artifacts, but an active place to be filled with innovation facilities and design studios, a repository for ideas not yet conceived. It was important that the design be emblematic of the mission—a dazzling combination of art, engineering, and construction.

“The form started to originate through the design of a building that, first of all, looked futuristic; however, I came to understand that the client appreciated the sense of feng shui,” says principal Shaun Killa, who conceived the building’s revolutionary form. In feng shui, a round shape represents both the fertile fields of earth and the limitless imagination of the sky above—therefore, the past, present, and future. While the building would evolve with exhibits of the future of education, health care, smart cities, transportation, government services, and more for the next five or perhaps 10 years, the void in the center of the building represents the unknown, according to Killa. “People who seek what we don’t know are the inventors and discoverers for the future.”

Art and poetry are manifest in the design, with Arabic calligraphy inscribed onto the exterior that features quotes from the prime minister about the future. But these “inscriptions” are in fact highly engineered windows, a dynamic blend of art and function. 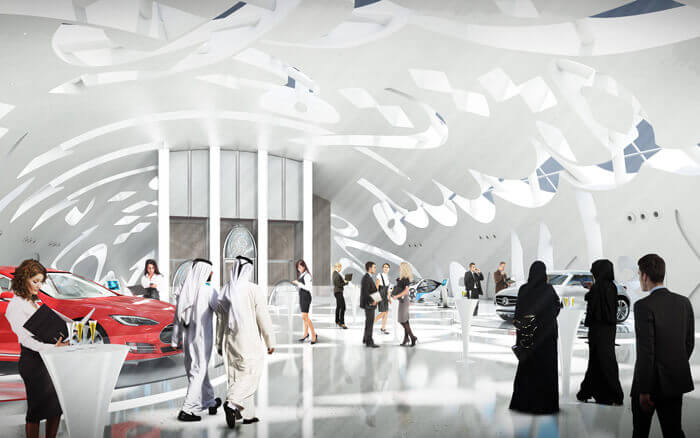 But design metaphors only take such a project so far. To ensure constructability and attain LEED Platinum status, Killa worked closely with BuroHappold for engineering services and BAM International for construction, employing 4D sequencing in BIM and reality capture for visualization.

“From the design models from BuroHappold, we were able to verify weights and constraints, using the models to produce data and the 4D sequencing, which also went in as part of the tender, to prove buildability,” says Bourke, who is more than a third of the way into a 28-month program for the project. “We continued that on to construction, using the models, updating them daily, filling the models with data that we would end up handing over as an output model.”

Once the team went into concept design, the entire process—all the way through to construction drawings and beyond—was designed and documented in Autodesk Revit. By designing with 3D models, the team could work through many potential conflicts in the structure, facade, and MEP (mechanical, engineering, and plumbing) systems.

“We made the decision that we were going to run 100 percent with Revit throughout the entire process,” Killa says. “There was no space for any 2D drawings that sat outside that realm. The model was becoming incredibly large so we actually colocated all of the team within our office just to speed up the process of communication. When you’re designing a building that is three-dimensional in every respect, and essentially the only things that are horizontal are the floors, there are so many decisions that need to be made where you need to be next to each other.”

In the past, such a futuristic design would have hit roadblocks as soon as it was put before the engineers or contractors. Now, the team could use software to create immersive visualizations, allowing collaborators to “walk through” the whole museum and check each element. Every potential clash could be detected on the deeply complex facade, in which the 3D calligraphy windows had to align correctly with the building’s unusual form, because overlaying a 2D calligraphy word onto a model would distort the word once it was applied to a 3D surface.

“During any highly complex building, the architect and engineers have to work hand in hand,” Killa says. “There is no other way that you could produce such a building.” This collaborative process also allowed the team to achieve LEED Platinum through more than 50 sustainable-design decisions, including the use of recycled-content products, photovoltaics for energy, and internal-air recovery systems.

The museum’s remarkable facade is a perfectly smooth, joint-free assembly of 890 unique stainless steel-and-fiberglass-fused panels fabricated using methods borrowed from the aviation industry. And it’s not just an eye-catching shape; it’s doing all the real work that any standard building envelope is expected to do. “Buildings with such complex surfaces are normally rain screens,” Killa says. “There’s usually a building behind the surface that is made of a waterproofing system. And the external facade, which might be more complex, would be a rain screen. This simplifies matters because it’s a bit more forgiving when creating these very three-dimensional forms. In this building, however, the envelope is doing the waterproofing, the airtightness, the structure, the lighting.” 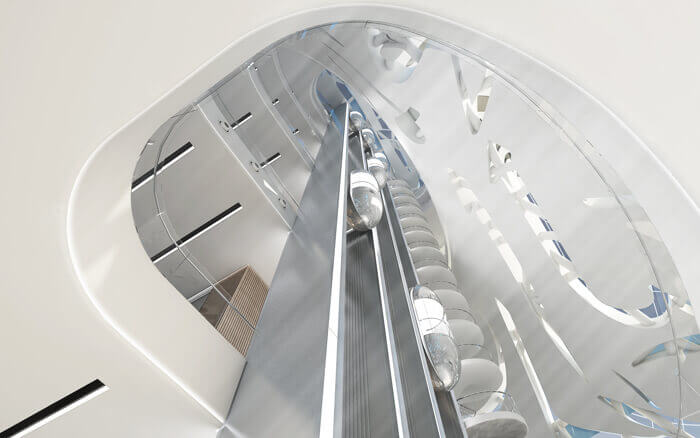 The museum’s interior presented its own challenges. In particular, a freestanding, double-helix staircase required some deep manipulation of Revit to make a model that was understandable, Killa says. The idea for the stairway came from DNA.

Tommaso Calistri, an architect with Killa Design, adds that the double helix also serves a practical function: Because staircases land at different places, the configuration allows differentiation between people who have paid the entry fee and those who haven’t, such as people who just want to pop in to experience the architecture. “It’s definitely an emotional building, because you will pass through and experience the building,” he says.“You will not just pass next to it without turning your head. That’s what I think architecture should do: make your head turn.”

Despite its futuristic shape, the Museum of the Future fits into a long history of architects pushing the limits of engineering, Killa says. Yet modern technologies and materials are allowing a rebirth in the fundamental approach to designing the spaces people inhabit. “We have the ability to make extremely complex shapes that were not possible to even design perhaps 20, 30, years ago,” Killa says. “Through BIM and other software we have today, we can actually create a new sense of architecture.”

Reality Simulation: Does it help to get an idea of the final product?
100
5/5
Waste reduction, labor costs and deviations
100
5/5
Greater control of the construction process
100
5/5
Improves collaboration between agents
100
5/5
Conflict resolution and clash detection
100
5/5
Correction and error handling
80
4/5
1 user liked this
+ Post a case study

Modeling, analysis and creation of BIM documentation of building B2 (Library) of the University of Jaén

The two companies presented their partnership during one of the workshops at the BIM&CO booth.