The Alto Tower, a facade that makes BIM 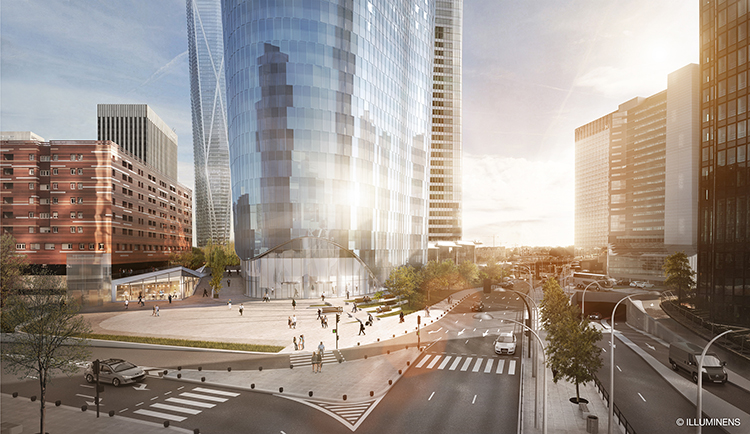 It is not its 38 levels nor its 51,000 m² that make the Alto Tower exceptional, but its shape. Imposed by the limited space on the ground, this flared cone grows from floor to floor to reach, on its last floor, three times the surface of the ground floor. BIM plays an important role in its design and production.

The double-skin facade of the building is a strong architectural component of the project. It is also one of the most complex elements: realized thanks to the parametric design, to take into account the shift of 12 cm outwards from floor to floor, which generates an angle of 1.5 ° towards the outside. These 12 cm are not trivial; in fact, none of the hundreds of windows that make up the facade has the same dimensions!

On this project, the parametric design has made it possible to create continuity between the concept, the design studies, the production of BIM models and the manufacturing. The detailed numerical models have made the technical synthesis more reliable, in particular for the smoke extraction and the positioning of the grooves in the facade beams.

From the beginning of the execution studies, the Construction Privée teams (Bouygues Bâtiment Ile-de-France) anticipated and integrated a codification of the equipment and the necessary parameters, by the subcontractors State Technical Corps. The goal: to automate the connection Equipments / Datasheets / Plans. The purpose is to offer a "BIM" DOE to the customer, even though the customer has not expressed any requirements vis-à-vis the "Digital" DOE contractually. In addition, data entered upstream offers possible interface points with the GTB and CMMS tools that could be exploited by the future maintainer.

Collaboration between project stakeholders, effective from design to future exploitation

Designed by IF Architects, the Alto tower envelope was designed by architects in a "Parametric Design" process using the Rhino / Grasshopper couple. The Permasteelisa company equipped with its PMF solution ("Permasteelisa Moving Forward", developed in partnership with Autodesk) was able to take ownership of the design designed by the architects, and ensure a continuity of design to manufacturing.

Finally, a significant advantage, the models produced by the facade batch incorporate a certain amount of data that can be coupled with the future technical management of the building. The models will also be easily adaptable to create interfaces with the maintenance solutions for the operation of the structure.

Point Cloud to BIM Process with a Real Life Project