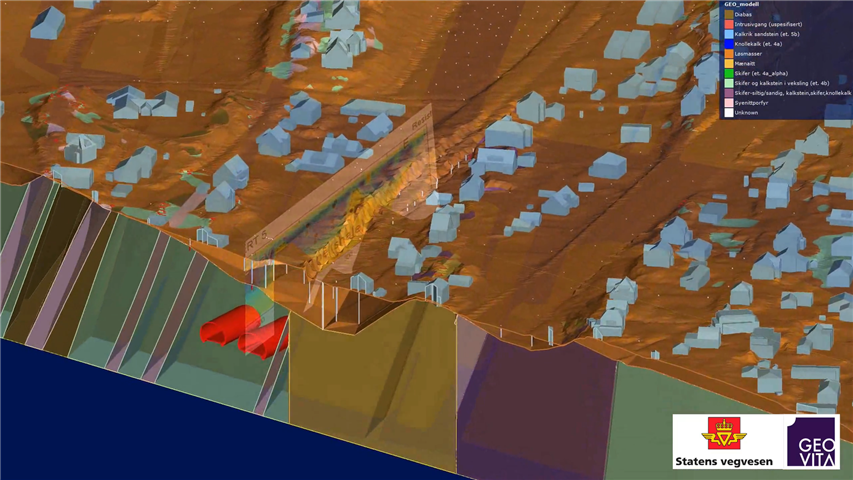 The Norwegian Public Roads Administration is moving forward in the work of the E18 Lysaker Ramstadsletta in the West Corridor: the Milliard project is projecting four new tunnels in the BIM model for construction. During the design phase, information has been collected from basic surveys of various kinds and now the Høviktunnelen is modeled in a 3D information model where the mountain quality is also included in the model. After that, it will be possible to provide information on planned mountain safeguards and mountain safaris. The same will be done for the three other tunnels on the route.

Geovita has cracked the code and created a model within geotechnics and geology. Information from over 100 documents is assembled in a BIM model. This way, a builder, projector and contractor can get a more interdisciplinary overview of what and how the project will be built. The Norwegian Public Roads Administration has some experience with BIM for usage instructions. The Road Directorate is responsible for model-based engineering control, however, it is completely new to have tunnel modeling in BIM. The project has a dialogue on getting third-party control of tunnels in BIM in the Road Directorate. They have been positive to this.

"In a three-dimensional geological mountain model, we can go into a 3D model of the mountain. This gives us a better overview of what the tunnel drivers can meet, "says Geir Dehli, Geir Dehli, Project E18 West Corridor. By collecting all information from basic research into a model, professionals can more easily see the connection between the tunnels and the surroundings. They can also see how the tunnels will lie relative to the mapped elements, such as rocks, depths, fog, wells. It will also provide information about the location of houses, the power of loose soil and rock overlay in a much better way than drawings will give us. "This will make the tunnel operation safer and more efficient," says Dehli. The work done in the West Corridor will be useful for later planning of tunnels.

Project Manager Grethe Tvedt in the West Corridor believes it is worthwhile for the project to collect all information about the basic conditions in a 3D information model. "The West Corridor is a large and highly complex road project. Every day, between 80,000 and 90,000 cars run on the E18 through a densely populated area. Underground there are miles of infrastructure. All utilities that make it easier to have the overview will make work before and after construction start more effective, "says Tvedt. She believes planning, engineering, and construction in BIM will make the road project more cost-effective, making it easier to detect conflicts between structures in the early stages of planning. It will also be easier for all parties to see what one should build. There will also be a need for fewer drawings.

She believes Vegvesenet is in front of a system change in planning road projects in line with the time when we replaced the drawing board with a DAK machine. - The entire organization will need training in the new tool. Both those who will build the road and those who will drive the road will retrieve information from the BIM model, says Tvedt.