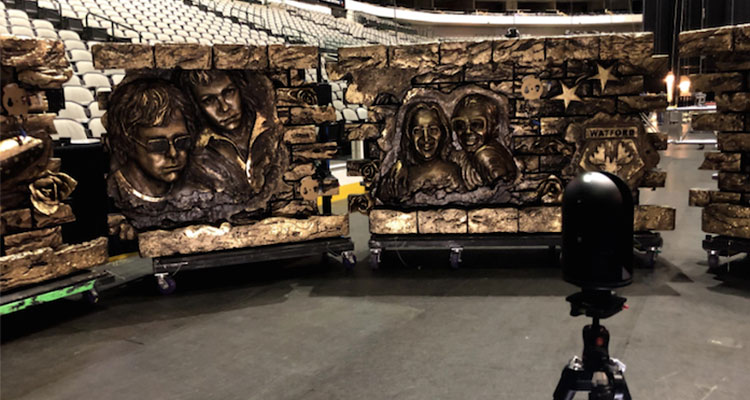 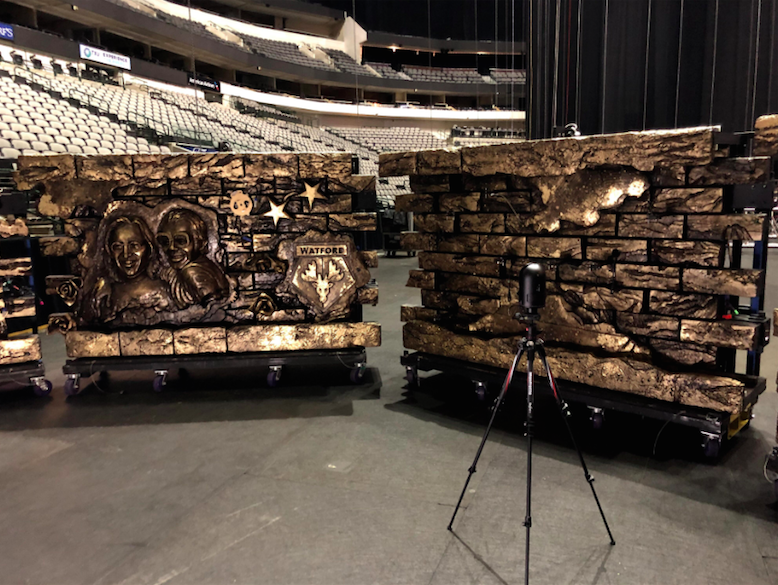 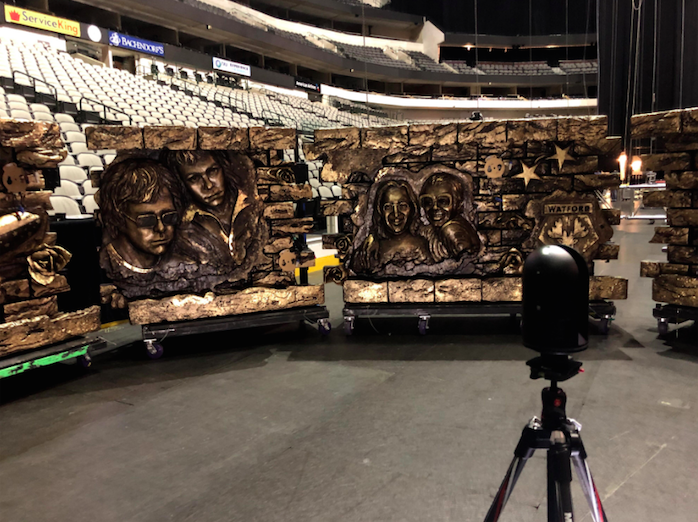 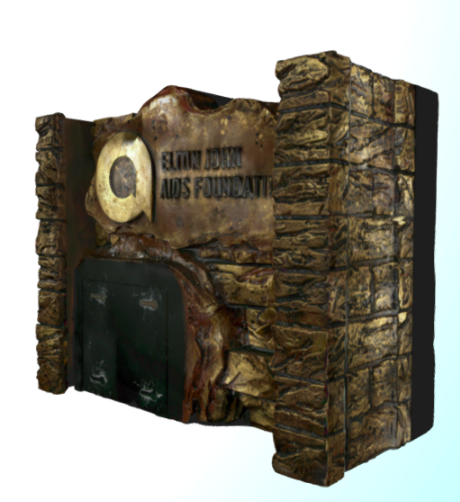 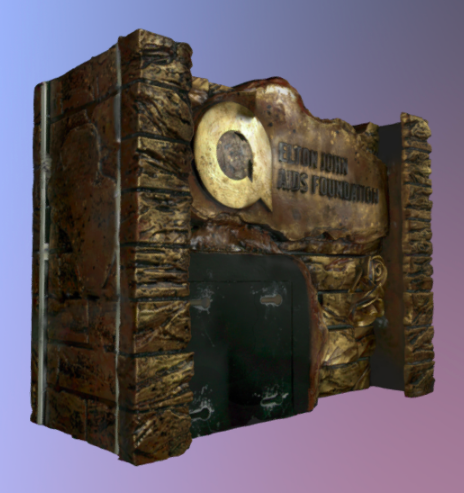 After a decade of working in events and experiential marketing and consistently coming up against incorrect venue plans and technical drawings, Dave Johnstone knew there must be an easier way. On discovering the Leica BLK360 imaging laser scanner, Johnstone immediately saw how accurate digital reality capture could be a game changer for his industry. He bought the device and set up a company - Beings Digital - off the back of its capabilities.

Experiential events are hugely valuable for businesses. Sometimes held in unusual buildings or unique and architecturally innovative spaces, they are an emotive way to engage audiences, attract attention and raise brand profiles. The success of events - such as Elton John's 'Farewell Yellow Brick Road Tour', for which Beings Digital helped digitise the designs created for the stage's central arch - depends largely on technical delivery, reliable data and accurate site plans that allow creative and build teams to develop concepts and bring an immersive experience to life. But delivering technical accuracy can be fraught with challenges.

THAT DOESN'T QUITE FIT

Projects begin with a site survey where technical teams use site measurements, original architect drawings, and photographs to create plans and 3D technical drawings of the space. However, it's often difficult to develop these plans accurately. 'As-built' spaces often differ from the architect's original drawings and photos only reveal so much. Human error can also play a role as teams have a short amount of time to take the on-site measurements. This means planning, design and creative concepts are often based on inaccurate or incomplete information - even a small degree of inaccuracy can result in expensive errors. Even with allowances built-in, built elements or equipment may need modification when they arrive on-site - often mere days before the project is live. And this means extra cost, on-site fixes or re-builds, more man power and a lot more stress.

ACCURACY AT THE TOUCH OF A BUTTON

Dave Johnstone was all too familiar with these challenges. But having bought a Leica BLK360 imaging laser scanner, his company, Beings Digital, could streamline the entire process, get better data sets and more accurate plans, and save time and money. According to Johnstone, "We can achieve a level of quality using the BLK360 never before known in the industry. Builds can be made to exact measurements in a workshop rather than being built on-site, which can dramatically improve quality."

Using the award-winning laser scanner and iPad software, Autodesk RecCap Pro, Johnstone can capture accurate 360 degree scans of locations and create plans, 3D models, photorealistic visuals and truly immersive virtual reality. The BLK360 is taken to the site, mounted on a tripod, and at the touch of a button creates detailed 3D point clouds made up of millions of data points in a matter of minutes. The colourised scans, along with photographs, allow him to virtually map everything - including exact elevations and other geometry - to a very high degree of accuracy. The plans are then shared with the design and creative teams so they can more easily develop the experiential concept and complete the necessary builds from precise measurements well ahead of the event.

One of Johnstone's recent projects was for Elton John's 'Farewell Yellow Brick Road Tour', which began in September 2018 and will extend over the next 3 years with hundreds of live performances across the globe. Johnstone travelled to Dallas, Texas, in late 2018 to capture and digitise the designs created for the stage's central arch, comprised by a total of 25 unique panel designs depicting some of the many highlights of the artist's career, from the release of his fourth album 'Madman Across the Water' to his many musical theatre contributions and the launch of the 'Elton John AIDS Foundation.'

Using the BLK360 as one of the tools for the project, Beings Digital's goal was to produce virtual models of the unique artwork which allowed these to then be digitally recreated in CGI and adapted to smaller and larger venues. By using 3D laser scanning technology, fans would then be able to enjoy the same creative experience in all upcoming shows without venue size constraints.

In order to capture the unique arch, which was approximately 25m wide and 10m high, the 2-3m high individual panels were placed in several circular formations and scanned with the BLK360 to establish the overall geometry. In one day, Johnstone was able to complete all the necessary scan work before processing the data over the period of a month and delivering the CGI assets.

In another project at the Ritz-Carlton Hotel Resort in Portugal, Johnstone modelled the space in 3D to allow the project team to more effectively experience and experiment with the space. Old buildings often present more challenges due to irregular layouts, space differentials between pillars or arches, or varying ceiling heights. The BLK360 overcomes this by precisely capturing all measurements within and around a space. They could also accurately plan the interior design of the space (bars, furniture, staging and production technology) by working around the inconsistencies of the building.

Beings Digital consistently creates efficiencies for its customers in environments where timescales and budgets are often very tight. And for Beings Digital's customers, having access to precise technical plans has radically transformed the way they can work - not to mention significantly reduced stress levels and last-minute nerves. The reliability of the BLK360 data completely removes the 'hope and pray' factor often associated with experiential projects that all come together a few days ahead of the event. Teams can be confident in the knowledge that equipment and complex builds will fit the space in exactly the way they had been imagined, without the last-minute fixes, snags, and re-building on-site.

For Beings Digital, there's also room to expand. The BLK360 is applicable to so many related industries and Johnstone is exploring new opportunities working with TV and film, interior, games and visual designers, heritage organisations and architects who can benefit from 3D scanning capabilities to improve their business processes and outputs.

For Johnstone, this is the very essence of his work: "Rather than improving the way I work, the BLK360 has enabled the way I work. It's a game changer and has solved some of the biggest challenges in our industry as well as allowing us to expand into new industries. Anywhere we can streamline and improve the planning process is valuable because developing these types of experiences is always down to the wire. There is often lots of uncertainty until you get to site with all the equipment. Knowing that everything will be correct means less cost, more efficiency, and a lot less stress for everyone!."

How Trends like Digital Twins and IoT Impact Construction?

What is Digital Twin and IoT?