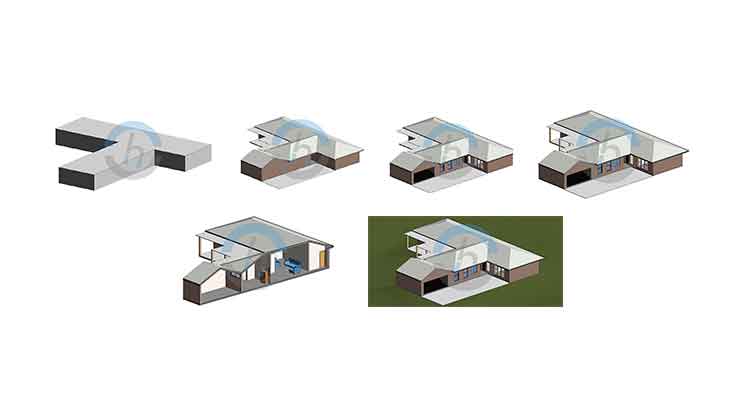 BIM modeling is something everyone in the AEC industry is familiar
with. It is the present and the future of the industry. And it is seen
that in recent years a large number of big and small companies are
highly reliable on 3D BIM models.

To start with, BIM (building information modeling) is an intelligent
technological tool that creates three-dimensional models for various
architectural, constructional and engineering purposes. It gives a
visualising dominance to the projects, wherever it is used. BIM is a
very common tool that is used by architects, engineers, contractors and
project owners.

There are numerous attributes of Building information modelling
that makes it such a popular tool to be used by so many users. It has
for sure changed how this industry functioned earlier. The
three-dimensional aspect is something that every user counts on as it
brings excess details to the table. These details help in levelling up
the project in various positive ways. Once stakeholders get BIM models for their project, there is no going back. The amount of ease it provides to the users calls for it.

With 3D BIM modeling services,
LOD is a very important aspect that has real value in the project. LOD
is the acronym for Level of Development which is used to define the
entire procedure starting from how a project function will start off
till how the finished project will appear as. To make it simpler, LOD is
a collected set of parameters that provides the AEC industry with the
requisite information. This detail helps in documenting the process and
bringing efficiency to it.  This allows all the stakeholders in
representing their project elements in a refined manner through various
levels of development. The desired results are always got when the BIM
specialists work with the architects and designers to finalise the LOD
the project requires. It helps all the other project users in
understanding the project a bit better with specific details of it.

How LOD does help in detailed BIM modeling?

It is because of the level of detail used in the BIM models that the
geometric elements stay in place. The information that is generated
through this makes the procedure much more effective in terms of quality
and sheer accuracy. It allows the professionals of the team to rely on
the information up to a certain standard.

The use of a level of detail makes the entire BIM modeling
procedure a systematic approach towards success. In other words, it
optimizes the regulates the process towards an efficient output.

The LOD also lets the designers of the project is getting to know
about the features in a detailed form and incorporate them at various
project phases. It gives a clear understanding of the model that is
worked on. This also leads to a much finer execution and outcome of the
BIM project.

The use of level of details also opens a communication channel for
the designers, contractors, and other team members. This adds to the
usable feature of BIM, making it even more practical. The LOD framework
is such that it can be a very effective communication medium for the
project stakeholders.

Where the concept of LOD did come in?

LOD is a term instigated by AIA i.e., the American Institute of
Architects. The instigation dates to 2008. It was then that five various
levels of details were introduced for providing the detailing stage of
any 3D BIM model.

Though the credit of the term obviously goes to AIA, the initial
concept was already there. It is viewed that Vico software which is a
software for construction analysis has been using a similar concept
where they used the models in respect to the project costs. There were
certain stages where they found their designing process to be at. Though
with time this concept has taken turns and has been upgraded to six
levels, its original roots did exist in the 2000s.

The different Level of Details (LOD):

This is the very first stage in a construction project. The model of
the construction project is shown from a very basic point of view with
least information. The models are represented through graphical
connotations or symbolic usage. The detail usually defines the area,
heights, orientation, volume, etc., that the model is to be comprised
of. The information in this model is generally considered to be on
approximate terms.

The second stage of detailing consists of the stipulations about the
materials to be used in the project and the quantity of them. The model
is generalized here, and the different modelling characteristics are
shown as per their approximate shape, quantities, locations, sizes, and
orientation of the construction project. Even non-geometric or
non-graphical information is added during this stage. Even this stage is
on approximate terms.

At this stage, all the measurements and related information are put
out in a more accurate form. Each of the characteristics of the model is
presented in a more specific way. This model produces very correct
details as per the size, shape, quantity, location, and orientation. The
details are calculated based on the requirement of the raw materials
and other resources. Here, the start of the project gets a definition,
as well as the elements, is positioned properly.

After the base for the construction is put together, the actual work
is started. The function of clash detection is carried out right at this
stage, and the clashes are rectified as soon as detected. The specific
construction element is seen in respect to systems of other buildings
and a connection is formed between all. There are certain non-graphical
characteristics that are included at this stage.

This happens to be a vital stage in the modeling process. Here the
minute details are added to the model for the final execution of it that
is for the erection purpose of the model. The entire detailing of the
project process is done at this stage.

The final stage of the process takes the graphical features into the
actual finished project and the result is produced. All the changes and
deviations from the initial design are appropriately shown at this
stage. This as the final model acts as a reference for all the
operational activities to be held in the future for the building
construction. It stays for the entire project life cycle.

The presence of Level of Details (LOD) in the BIM modeling process
creates the intelligence of BIM that it is known for. It represents the
model in a more informative form without jeopardizing its basic details
of it. The LOD maintains the flow of communication and lets the
professionals have a more informative environment regarding the
construction process. It also sets the graphical outcome correctly so
that the accuracy of the final model is not compromised anyhow. Going by
the various stages assures that the individual stage of the project
gets sufficient focus, and the work is carried out in a productive
manner. The designers and other professionals can vouch for the
productivity that LOD brings to work.

The advantages and disadvantages of BIM modeling in the construction industry

Importance of BIM for MEP Engineers

How drones are disrupting the BIM industry