What if history had BIM? Part Two: The Great Pyramids

What if BIM was employed when the pyramids were built? 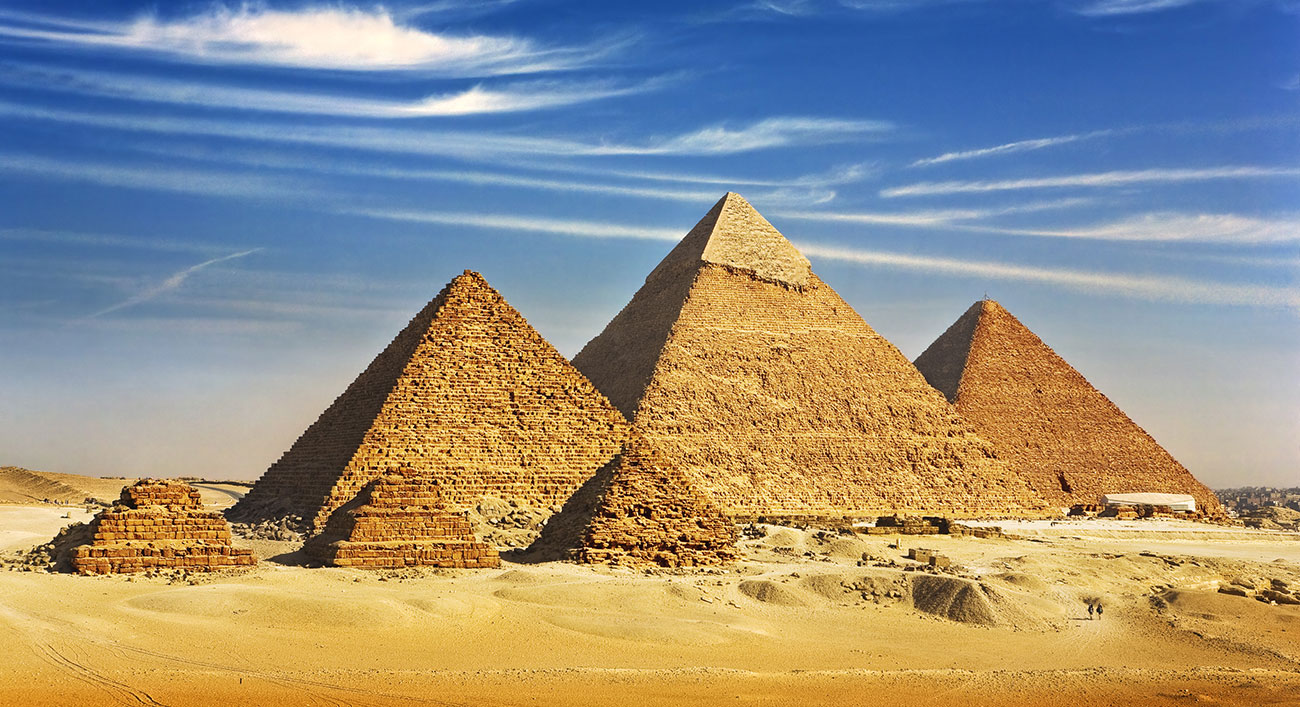 Country: India
The great pyramids in Egypt are considered to be among mankind's greatest achievements, and their construction during the ancient past only makes them more impressive and awe-inspiring. The pyramid of Khufu, more widely known as the Great Pyramid of Giza, is the only one of the Seven Wonders of the Ancient World to survive intact, and a great deal of mystery and speculation still surrounds the questions of how, why, and even when it was constructed.
Most Egyptologists agree that the Great Pyramid, which is both the oldest and the largest of the three pyramids of Giza, was built in roughly 2650 BC, during Egypt's Fourth Dynasty. It is also a generally held belief that it was constructed as an elaborate tomb for the pharaoh Khufu, also known as Cheops. Originally 146 metres high, it now stands at 138 metres due to the removal of the outer casing stones around the peak. Each of its four sides is 230 metres in length, and 2.3 million limestone blocks are estimated to have been used in its construction, weighing between two and 80 tons each. The pyramid slopes upwards at an angle of 51 degrees and is aligned to true north.

If the ancient Egyptians had used building information modelling (BIM) when constructing the pyramids, then we would expect to at least have a better idea of how they achieved this incredible feat. Indeed, it could be suggested that ancient Egyptians used a similar methodology to BIM, with client, designers, architect, and construction teams all working together on site at the same time. They may have even built a physical model of the pyramid to scale on-site, before actual construction began.

The advantage of BIM is that it facilitates collaboration and communication throughout the life cycle of a project. Given that the construction of the Great Pyramid alone is thought to have taken between 10 and 20 years, BIM would certainly have been extremely useful in terms of keeping track of the project, and may also have sped up the process as a result. If the initial 3-D model survived, we would now have answers to some of the mysteries that surround the construction of the pyramids and the purposes of the internal chambers, tunnels, and corridors.

During the 1990s, Jean-Pierre Houdin created a fully-functional CAD architectural model of the Great Pyramid to support his theory that a regular external ramp was used to build the first 30% of the structure, and that internal ramps were used to construct the remainder. Houdin's theories are by no means universally accepted however, and CAD modelling is relatively primitive compared to the data-rich 3-D digital modelling process offered by BIM. Perhaps using BIM, even now, would help us to better understand the methods by which this astonishing achievement was made.

Another advantage of BIM is that it can simulate how the structure will be affected by the passing of time, for instance the changing of the seasons and the position of the sun throughout the day. This would be especially useful in considering the pyramids in relation to the gradually changing positions of the stars. Some think that the three Great Pyramids are aligned with the constellation of Orion, for instance, albeit as they appeared in 10,000BC, over 7000 years before the oldest of the pyramids is believed to have been constructed.

It is believed that Egyptian astronomers observed the movements of two stars on each side of the celestial 'pole' and waited until they perfectly aligned along that pole in 2467 BC. BIM would certainly have provided an easier method of configuring the pyramid to true north, though whether the resulting accuracy could be improved upon is debatable.

Certainly, the use of BIM technology would have helped in terms of mapping out the location with aerial photography and digital elevation. The Great Pyramid is built on a 13.1-acre site levelled to within a fraction of an inch. BIM would also have made it far easier to calculate the angle required for the structure. It seems that the ancient Egyptians developed their own techniques through trial and error over several generations, as demonstrated by earlier attempts such as the Bent Pyramid at Dashur, which rises at 54 degrees until the top section, where the angle changes to 43 degrees. It is believed that the builders changed the angle through necessity when the construction started to show signs of collapse. The use of building information modelling would have prevented the need for this, as all such calculations would have been present in the digital model before actual construction began.

BIM would also have helped make the construction process more efficient by calculating the precise amount of labour and materials required. Herodotus originally stated that the Great Pyramid took 20 years to build using 100,000 slaves, but modern researchers now believe that it was actually built by a smaller number of skilled workers who were paid for their services: 14-40,000 over a period of 10-14 years.

We do not know for certain exactly how the pyramids were constructed, but their scale and accuracy is breath-taking considering the primitive methods available at the time. It's little wonder that far-fetched theories concerning inspiration from older, vanished societies possessed of advanced technology continue to circulate. One might fancifully speculate that the architects of Atlantis possessed a form of BIM and passed this on to the Egyptians before their secrets were lost forever. We can be sure that any attempt to build the pyramids today would certainly use building information modelling in order to achieve the same degree of accuracy and efficiency the ancient Egyptians demonstrated over 4000 years ago.

Are Donald Trump and Hillary Clinton a good choice for the AECO industry?

"With BIM we demolish barriers, collaborate with other manufacturers and facilitate collaborative work with our customers"