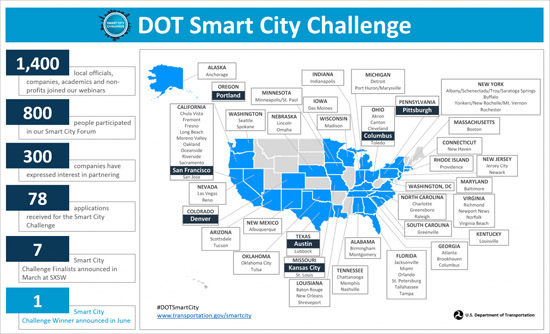 Country: United Kingdom
Now that building information modeling (BIM) has been firmly established in the AEC industry for the design, construction, and operation of individual buildings, and infrastructure modeling (also referred to as “BIM for infrastructure”) is starting to gain some traction for the design, construction, and operation of infrastructure (see the AECbytes archived article, “Extending BIM to Infrastructure”), we are also seeing some movement towards applying the intelligent modeling concept to the next broader level of human habitation, the city. While there is no agreed-upon terminology yet to refer to the concept of modeling cities, we will refer to it here as “city information modeling” or CIM.
The basic idea of CIM is to have an intelligent (or “smart”) city model, similar to how we have intelligent models for buildings and for infrastructure that contain detailed information about the entities in the model and the relationships between them. Just as these intelligent models can be used to design and build buildings and infrastructure more efficiently and effectively, similarly, an intelligent city model could potentially be used by city planners and urban designers to plan out a city more efficiently and effectively. Also, just as the BIM model of a building has the necessary information about it to enable analysis and simulation, likewise, a CIM model could enable city-wide simulation of various aspects such as traffic, congestion, energy, impact of natural disasters such as earthquakes or hurricanes, flood control, etc.
While we are still a long way off from having such CIM models available for our cities, there are various technology initiatives in this direction that seem promising, some of which are highlighted in this article. Before looking at these, however, let’s look at how CIM is different from the concept of “Smart Cities” that we are increasingly starting to hear more and more about.

While there are many ideas about what makes a city “smart,” the overall vision is more or less the same—better planned, more connected, and more livable cities. There are an increasing number of “Smart Cities” initiatives all over the world, most of which are driven by local, state, and national governments. Notable examples include Singapore, Amsterdam in the Netherlands, Barcelona in Spain, Stockholm in Sweden, and Manchester in the UK. There is even an entire “Smart Cities Mission” project in India which aims to develop 100 cities all over the country to make them citizen-friendly and sustainable. And in the US, earlier this year, the Department of Transportation (DOT) organized a Smart City Challenge competition which was won by Columbus, Ohio, for its vision of the future of an American city with a fully integrated, forward-looking transportation network.

There are also an increasing number of “Smart Cities” conferences being held every year, including global events such as the Smart City Expo World Congress which was launched in 2011 and which is held every year in Barcelona; the World  Cities Summit conference held every two years in Singapore, with the 2016 event just concluded in July; and the New Cities Summit which is held in a different country every year, with the 2016 event held in Montréal, Canada, in June. Then there are also country-specific events such as the annual Britain's Smart Cities conference, the Smart Cities Week in Washington DC, and the Via Expo Smart Cities Exhibitions and Conference for South-East Europe coming up in Sofia, Bulgaria. While it is terrific to see so much interest and activity in improving the living conditions and state of the art of our cities—work that is absolutely necessary and must be done—what we are referring to with CIM is a little less ambitious: developing a technology to create information-rich city information models that can assist in the planning, design, and analysis of different aspects of our cities. This, while smart cities involve so much more than technology—such as policy, politics, governance, etc.—CIM is focused purely on a component of the technology that will make smart cities happen—a critical piece no doubt, but one that has to work in conjunction with other technologies such as big data, IoT (Internet of Things), real-time monitoring of sensors, and so on.

It is not surprising that some of the leading vendors of BIM applications for the AEC industry, particularly those also developing BIM for infrastructure such as Autodesk and Bentley, are slowly but surely expanding their technology repertoire to CIM. Autodesk has already made great strides in developing an intelligent modeling tool for infrastructure design, InfraWorks (see my Viewpoint article, “Why Isn't There a Smarter BIM Tool for Building Design, Yet?”), and it is also positioning it as a tool for some level of city modeling. For example, for the US DOT Smart City Challenge competition mentioned earlier, Autodesk provided the finalist cities, including the winner, with complimentary access to its InfraWorks 360 software, including training and technical support, to help define their vision for the competition (see Figure 2). InfraWorks was also used to develop a sustainable city strategy for Washington DC in a case study last year (Figure 3).

Figure 2. The use of InfraWorks in creating a model of downtown Columbus for the Smart City Challenge competition. (Courtesy: Autodesk, HNTB)

Bentley, which has always been strong on the infrastructure front (its annual conference is called “Year in Infrastructure”), actually has a formal 3D Cities Solution which provides an integrated above- and below-ground information model of the city comprising the built environment and utility infrastructure. The solution comprises several Bentley solutions including its core BIM application, AECOsim Building Designer; several of its map and GIS applications including Bentley Map, InRoads, and GEOPAK; point cloud solutions such as Descartes and Pointools; its standard project management and coordination tools such as ProjectWise and Navigator; and the most recent additions to its project portfolio, ContextCapture and LumenRT (described in the article “Bentley's Year in Infrastructure 2015 Conference”). Bentley’s CIM solutions have already been widely used in large-scale city modeling projects in Montreal, Helsinki, and in London’s Crossrail project. A more recent example is their use for the production of 3D map data and the city model for the city of Singapore (Figure 4).

In addition to these solutions from BIM vendors, there are also CIM-specific solutions being developed which have the advantage of being designed for city modeling to begin with rather than extending existing modeling solutions for buildings and infrastructure. These solutions are closely integrated with GIS technology such as CityGML, which is an open data model and XML-based format for the storage and exchange of virtual 3D city models, and the corresponding 3D City Database, a free geo database to store, represent, and manage virtual 3D city models on top of a standard spatial relational database. Examples of these CIM-specific solution vendors include virtualcitySYSTEMS, which develops a suite of products for collecting, managing, distributing and using 3D city and landscape models (see Figure 5); and Cityzenith, which develops a web-based SaaS platform called 5D Smart City that integrates publicly available city, county, and federal data about a city with data from IoT devices, social media data, maps, models, etc., to help cities monitor water, energy, Wi-Fi coverage and utilities, as well as understand social trends, political sentiment, traffic patterns, and financial metrics.

Additionally, there are also some vendors developing solutions focused primarily on visualizing city models such as SmarterBetterCities, based in Switzerland, which develops an online platform called CloudCities for hosting, sharing and visualizing smart 3D city models (Figure 6); CyberCity 3D, based in the US, which has launched a 3D Smart Cities mapping platform to help municipal authorities and planners visualize their towns and cities in 3D, including  existing and future city plans, proposed developments and schemes (Figure 7); and Agency9, based in Sweden, which develops a navigable 3D city visualization solution for urban planning called CityPlanner (Figure 8). 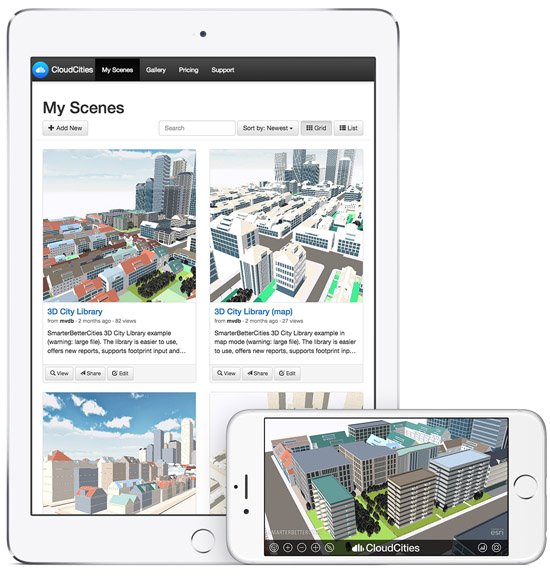 Figure 6. The CloudCities platform for visualizing city models, even on mobile devices.

Figure 7. 3D model of London on the CyberCity 3D platform.

Of course, we still have a lot to do even with BIM, let alone, infrastructure and city modeling. We have just explored the tip of the iceberg in this article. Subsequent articles devoted to CIM will take a deeper dive into related technologies such as maps, GIS, and CityGML, and how they need to come together to create intelligent city models that can be analyzed and simulated in real time to continuously improve the health, safety, and well-being of the people who live in them.

While industry players slowly came to terms that digital transformation is no longer avoidable, City Information Modeling (CIM), is now quickly making its round

Getting started with Revit can feel daunting. But, like anything new as you become more familiar with it you will start to see the benefits of the basic modifying tools