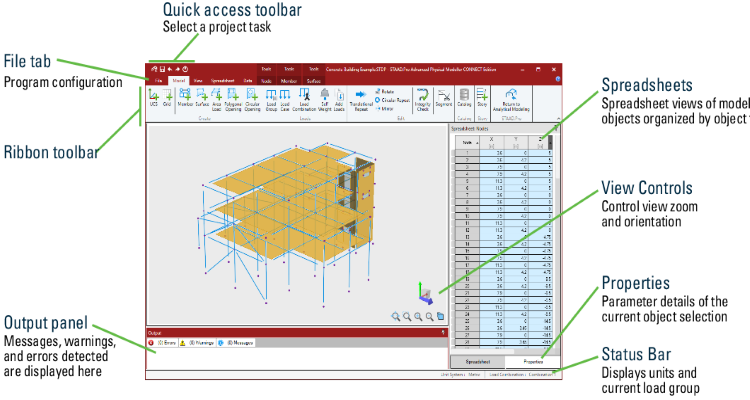 As the level of detail in the BIM models increases, so does the need for automation. Without effective automation, the engineer’s time will be consumed in the transformation of the physical architectural vision into the analytical structural idealization. Bentley’s STAAD.Pro structural analysis application incorporates these philosophies to support a more physical workflow in which changes are easier to make and STAAD.Pro CONNECT Edition includes a new physical modeling environment for the creation and maintenance of an Analytical-Physical model.

Physical modeling is one of the significant features included in the STAAD.Pro program. And many engineers have come to rely on its unique features for specialty civil structures, like metro stations, bridges, tunnels, culverts, and more for steel, concrete, timber, aluminum, and cold-formed steel design.

What type of projects can STAAD Pro  be used in?

As said above, STAAD Pro can be used for a variety of civil engineering projects: water and wastewater structures, stations and airports, tunnels, culverts, bridges plants and buildings.

When it comes to water and wastewater facilities require careful coordination across the site, mechanical, electrical and structural design disciplines. Various components, such as basins, clarifiers and storage tanks must be adequately designed to resist loads imparted on them by fluid, soil, thermal and other natural resources.  In this area, STAAD Pro Physical Modeler also proposes a new water tank module in Section Wizard.

To see that and other features of Physical Modeler Zigurat Global Institute of Technology organizes in collaboration with Bentley a special masterclass session dedicated to exploring its set of features and the performance improvements in creating models, assigning properties and applying loads and load combinations.

Join the Masterclass next Tuesday, April 20 for a session with Richard Tully, Advisory Support Engineer for Structural products of Bentley.

How to generate and coordinate BIM for structures with TEKLA Software

How significant is the digital twin in Architecture?