Amaravati: core infra to be ready by year-end

Authorities hope to finish building the entire trunk infrastructure of civic works, roads, water, sewage and electricity lines in Amaravati by the year-end 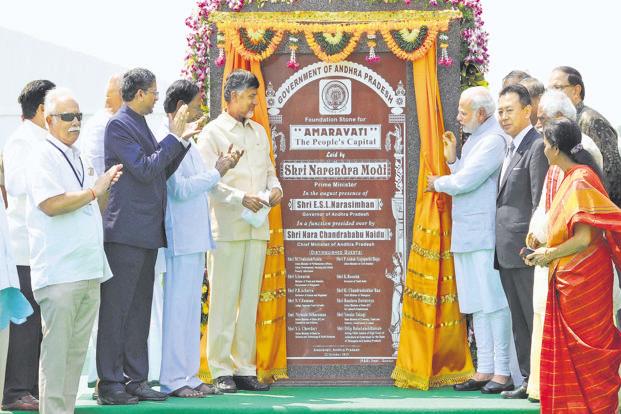 Country: India
Hyderabad: Amaravati, India’s newest capital city, will have its first set of homes—for government employees—ready by the year-end.
With pre-construction work done for the entire project and the required farmland required for the future capital of Andhra Pradesh, authorities hope to finish building the entire trunk infrastructure of civic works, roads, water, sewage and electricity lines within the same period.
With a core city area of 217sq. km, Amaravati, which is situated between Guntur and Vijayawada, will also have an 8,603sq.km capital region area.
“(Construction) works are going on at a brisk pace. We have given back land to the farmers as well (who gave up their agriculture lands under the land-pooling scheme, or LPS). The advantage for them in Amaravati is that they are partners in the development of the city as well,” said Andhra Pradesh Capital Development Region (APCRDA) commissioner Sreedhar Cherukuri.
Under the LPS, the APCRDA is offering 1,000sq. ft of residential land and 250-450sq. ft of commercial land in the new capital to those who give up their farms and an additional financial compensation ranging from Rs30,000 per acre (of dry land) to Rs50,000 per acre (fertile land) per year for 10 years, with 10% appreciation every year.
Of the total 58,000 acres land required to build Amaravati, about 36,000 acres are private agricultural land, of which more than 33,000 acres have already been acquired. The remainder is government land.
Cherukuri said that work on about 60% of the 63 memorandums of understanding (that were signed last year in Vishakhapatnam by various investors) has begun. The MoUs promise to bring investments worth Rs.1.25 trillion to Amaravati.
The new capital also includes a start-up area spanning 1,691 acres, which will be built by Singapore-based Ascendas-Singbridge Pvt. Ltd and Sembcorp Development Ltd in the next 15 years. They were awarded a contract by the Andhra Pradesh government last year to act as the master developer.
“This year is very crucial for us, as the execution works for our plans are beginning. About Rs21,000 crore worth of works are in process now,” informed another APCRDA official, asking not to be identified.
Apart from using blockchain technology to secure land records (which are also linked with Aadhaar cards of land/title owners), the upcoming capital will also use the building information modelling (BIM)-based urban asset management system to map all urban infrastructure with the Geographic Information System (GIS).
“We are preparing a system to map all the above ground infrastructure with GIS. Similarly, Amaravati will also have a BIM-based online system for building permissions. With this, all building-based details are saved in our platform, and the data is kept as a repository with the APCRDA,” explained Cherukuri. He added that this will allow residents of Amaravati easy access to data on their infrastructure.
By installing this sort of technology, the Andhra Pradesh government has in some ways established the foundations of a smart city, said Sudeept Maiti, managing associate with the city team at the World Resources Institute (India), Bengaluru. “Whatever comes in the future to the city will always be integrated into this technology if you have the foundations in place and set up a city with where applied technology can come with a ‘plug-and-play’ way,” he added.
Maiti, however, cautioned that the government’s focus should be the citizen, and not just technology, because the latter is just a means to achieve a better quality of life. “The focus should also be on spaces outside, and they need to be designed as much as the buildings themselves in Amaravati. When you have a safe city, quality of life is ranked much higher for example,” he added.
The much-awaited designs of the high court, secretariat and assembly government complexes, which have been finalised, will go into the construction phase later this year. The tenders for the buildings will be floated soon, said the APCRDA official.
“The assembly will also have an atrium in the centre for public debate,” Cherukuri told Mint.

Overcoming the Barriers to BIM Adoption in AEC industry

Breaking the barriers to BIM adoption

When will BIM reach its full potential in the GCC?

Although BIM technology is not new to the construction industry, the process of implementing it across all projects is still evo