BIM on the high seas? 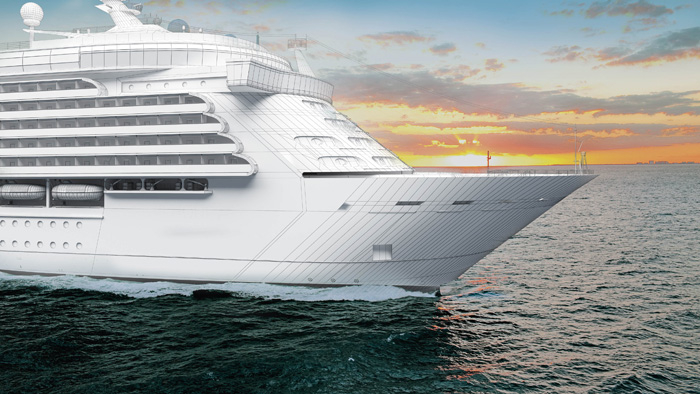 Country: United Kingdom
During the late 1800s, the creation of passenger ships began, with similar attributes to luxury buildings all designed to the grandeur of neo-classical architecture. The architects and design teams were primarily naval specialists, but adopted the ornamentation of buildings within the interiors of passenger ships. The process would have incorporated hand drawn blueprints, starting with a concept direction, then technical detail drawings for interior fit-out during shipbuilding.
The introduction of CAD transformed the approach, changing the duties for design teams going forward. Information technology also allowed design teams to digitally coordinate drawing files with shipbuilding yards and fit-out contractors. By having overlays for each specific discipline, the shipbuilding specialists were able to quickly appraise the construction of a passenger liner in great detail. This is similar to the approach taken in building design, where architect, interior designer, engineer and project manager are appointed. However, marine timescales and regulations are highly stringent.
The spatial arrangement of modern liner fleets is set by standards of the operator, including ship types and specifications for the ship’s own infrastructure and systems. Cruise operators usually nominate a shipyard which can provide a standard OEM or catalogue of typical passenger ship structures. Unlike aircraft cabin and rail carriage design, undertaken by parametric modelling validated by the OEM, cruise and ferry interior designers rarely incorporate parametric modelling and most operate only 2D CAD systems.

At Fraiserline, our roots are in architecture, but we have merged this expertise with shipbuilding and developed a niche for the interior design of cruise liner ships. Since 2016 we’ve helped innovate new passenger liner fleets across various operator brands.

During this process we’ve continually explored the important question of can BIM be expanded to cruise and ferry ship design, and can the boundaries of the software be pushed beyond buildings?

Our biggest challenge as a business has been working alongside the carrier to appoint a suitable digital design system for efficient collaboration and teamwork coordination, specifically to the cruise-ship and marine engineering industry. The initial investigation demonstrated that marine engineering companies were working on a wide range of specialist design tools, ranging from 2D CAD to the latest versions of 3D parametric systems.

Recently, I was told by an industry contact that Royal Caribbean International has started to incorporate BIM into the corporate shipbuilding department. Whilst the overall naval attributes may prove difficult to incorporate into BIM, the building-like elements of passenger ships could be introduced into the BIM environment.

Typically, tools such as SolidWorks have been used for masterplanning naval architecture and provided better features than 2D CAD. In addition, the coordination of specialist teams needs improvement and almost welcomes the collaborative advantages of BIM – to automate, improve and streamline the design-to-delivery process. Siemens PLM has gone a step further and developed a specialist software, utilised by companies such as Daewoo Shipping, Hyundai Heavy Industries and Sunseeker International. The system includes a number of specific features such as ship structural analysis, material data, mechanical and engineer tools and other comprehensive tool sets. This, however, when looking at a large marine project such as a cruise liner in the context of a building, does not provide a teamwork platform that can be friendly to all disciplines throughout the whole build process.

Recently, Fraiserline began moving its core architectural design projects onto BIM at Stage 02 in order to ease efficiency and productivity within the office. This was a prime opportunity to test the capabilities of Autodesk Revit to see if it had any merit for the cruise industry.

Having recently undertaken refurbishment contracts for global superliners, we have found that many design teams supply project data as SolidWorks or IGES files. In some cases we have received a point cloud internal survey.

With our idea to pilot Revit for a superliner refit, the import of SolidWorks files has proven successful, and can be cleanly organised by Revit “families” in a similar practice to managing the import of point cloud data files.

Whilst most attributes of parametric CAD/CAM files are not fully editable or transparent they can be referenced to represent another team’s design elements efficiently within the BIM environment. This has given our designers a quicker and clearer understanding of the proposal in three-dimensions and allows us to parametrically model a solution in real-time for sign-off and approval, and in some cases undertake quick CGI simulation visuals.

The confidence in pushing BIM to non-building related projects has been taxing and frustrating at most times as a small business. Whilst trying to migrate various parametric model formats supplied by other parties, improvising tools has been near-impossible for non-standard components in BIM, such as the creation of watertight bulkhead doors specific to marine regulatory requirements.

Secondly, a ship structure being primarily steelwork can link to the superstructure orders of Revit, but does not validate the ship performance standards, structural assessment or construction methods that differ from typical building systems as per the current defaults of BIM.

The overall mantra of BIM is appropriately relevant for the cruise-ship design sector, allowing architects, designers, engineers and professionals to collaborate and coordinate efficiently and effectively. The programmed building vocabularies within the software could be adapted for cruise-ship megastructures and could correlate with other engineering software systems with ease. However, the end result has still proven to be commercially beneficial when comparing against former practices by using 2D CAD software.

The fusion between parametric product design software and parametric architectural software needs a middle-ground, that would re-shape the way that large passenger ships are built. In addition, the latest BIM and parametric design software includes metadata capabilities that link to materials and specifications in order to provide a live inventory of production information.

Within the marine industry itself, the technological innovations with ship systems including navigation equipment, power generation, propulsion and autopilot have automated the bridge to “sail by wire” as similar to the aviation industry. Contrary to the current design process, the benefits of introducing BIM to the marine market would innovate the future of shipbuilding, yet could provide the opportunity for a new software tool specific to this type of industry.

The question remains - what will be the future with the creation of new superliners, and what design tools will be introduced, if not BIM, to improve the future delivery of marine project in specific focus to the multi-disciplinary requirements with the cruise and ferry industry?

What is the role of BIM Manager in construction?

The BIM Manager must coordinate all the disciplines that intervene with the global vision of the project, at the same time must deliver results and progress to the management of the work or project

Why Architects, Structural and MEP Engineers should upgrade to Autodesk Revit 2020 Software?