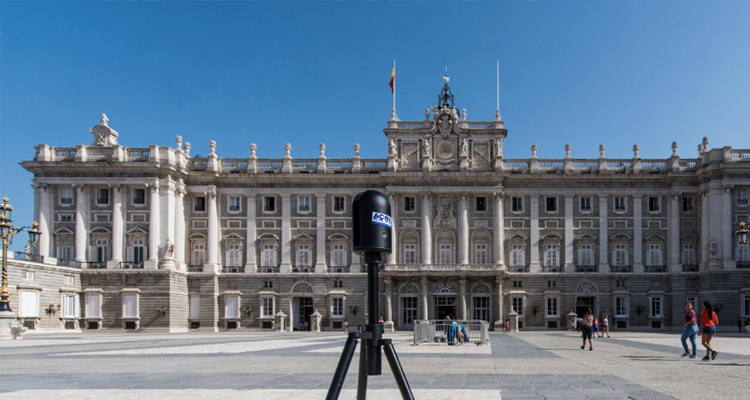 Democratisation of 3D laser scanning and reality capture increasingly means more industries are able to apply the technology in their daily work, including for example, restoration and preservation.

In Spain, Patrimonio Nacional is the government institution in charge of administering and preserving some of the sites and historical buildings owned by the Spanish State. Patrimonio Nacional needed to create an accurate 3D model of one of Spain’s most iconic buildings: the Royal Palace in Madrid. The goal was to produce a unified digital record of the current state of both the interior and exterior of the building, adding to existing records which date as far back as 1738 when construction began.

The project to capture the Palace, which welcomed over 1.5 million visitors in 2017 and has over 137,500 square metres, began in the summer of 2018. Following a public tender, the project was commissioned to the services department of multinational surveying services business Grupo ACRE. Their proposal included the use of Leica Geosystems’ latest 3D laser scanning technology. In order to make the 3D model a reality, the Leica ScanStation P40 terrestrial laser scanner was used in partnership with the Leica BLK360, the world’s smallest and easiest to use imaging laser scanner.

Maximum detail in the most confined spaces

This ambitious project was divided in two phases and specifically designed  to guarantee maximum precision and minimum disturbance to the space. In the first phase, on-site scan work was completed with the BLK360 and P40. A total of 5,300 scans were taken, 1,300 of which were captured by the BLK360 with an average of 40 scans per day. During the second phase, the data gathered by both devices was processed using Leica Cyclone software, resulting in the final unified point cloud.

The BLK360 is simple to use, especially in small spaces, meaning the same technician that conducted the larger data collection with the P40 could simultaneously use the BLK360 as a complement to access smaller spaces. “This increased efficiency in our daily data collection by up to 25 per cent compared to using the P40 alone,” said Oscar Gonzalez, technical director at Grupo ACRE.

At a push of a single button, the BLK360 captured 360º HDR spherical imagery and a 360,000 point per second laser scan. This produced very high levels of detail in the most confined spaces within the historic building, including its staircases.

By deploying Leica Geosystems’ scanning technology, data and information that was previously unknown has now been uncovered - such as the exact number of rooms and windows in the 280 year-old building. This had, until now, remained a mystery as spaces were progressively modified and adapted since the initial construction to accommodate the different royal residents over the years.

Transforming the future of historical preservation

This project to produce an updated floor plan of the Royal Palace sets the standard and precedent for plans to digitalise more historical buildings across the country. Patrimonio Nacional now has a unified and millimetre-accurate floor plan of this historic building, not only to document its history, but also guide its upkeep and preservation in the future.

Tendencies and Innovations for Construction