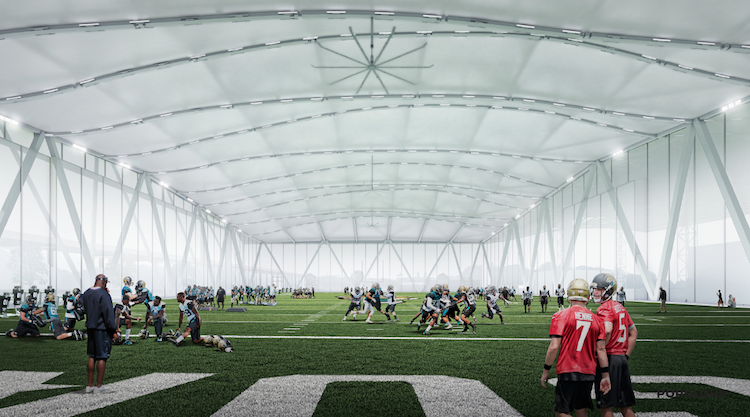 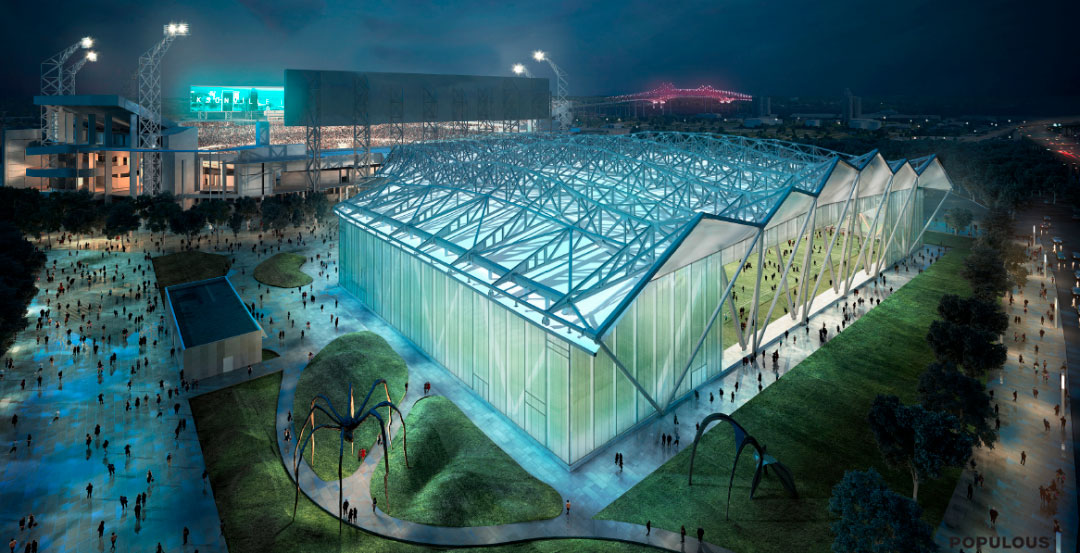 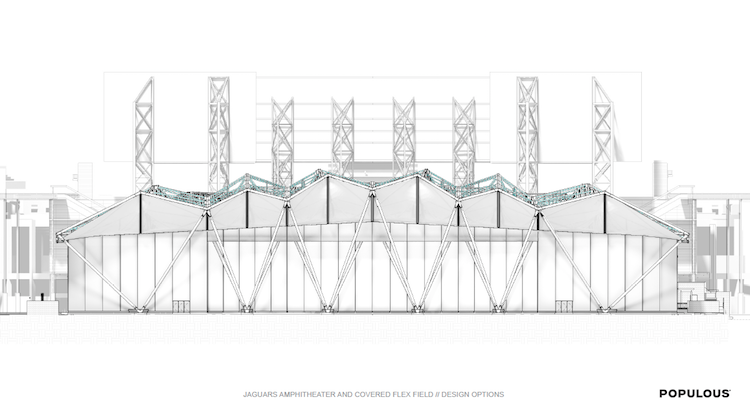 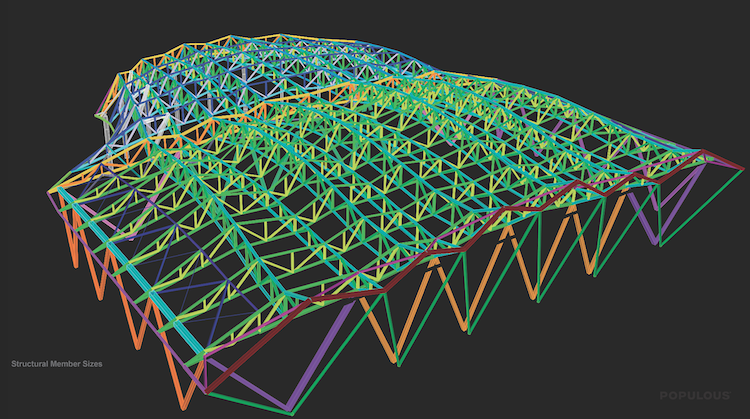 The project team employed Revit, Rhino, Grasshopper, Kangaroo, and a host of other software applications to design and build this uber-complex sports and entertainment facility.

Inspired by the city’s mesmerizing network of estuaries and bridges that span the St. Johns River and frame the NFL Jacksonville Jaguars’ home facility, Daily’s Place, the Jaguars’ new 6,000-seat amphitheater and 94,000-sf indoor practice field, owes its identity to a local convenience store chain that won the naming rights.

There was nothing convenient about the amphitheater’s design, however. The 160,000-sf structure is a deceptively complex building, marked by its most intricate feature, an undulating roof. Hundreds of AEC professionals scattered around the world employed a dazzling array of 3D and 4D software programs to create and build this signature design element.

According to Populous, this was done to keep the continuity of the building’s architecture in relation to Jacksonville’s bridges visible from the exterior. Since right angles are rare in nature and just about nonexistent when it comes to rivers, the roof—in fact, the entire structure—was designed such that it does not have a single piece of steel perpendicular to another.

Creating and implementing this riverine design was premeditated, calculated, and engineered to come together exactly the way it did. But without the use of software like Grasshopper, Rhino, and Revit, there is no way the roof could have been completed in five months, as it was.

Grasshopper was used to review the design of the structure and calculate the reductions in roof fabric that were needed to suck in the roof from the sides and reduce overhangs. Grasshopper also helped to rectify a delay in the rolled steel schedule by allowing the team to easily determine which members provided a stronger impact between rolled versus straight members.

The workflow of Rhino to Revit helped the team to discover that the roof geometry needed to be corrected at the intersection of the roof and the concourse. This workflow allowed the build team to locate the intersection early on and correct the geometry before construction advanced too far, saving time and money.

Hundreds of professionals from firms across the U.S. (Kansas City, Los Angeles, New York, and Jacksonville), England, and New Zealand participated in the project. To avoid time-wasting errors, Populous maximized its 3D model and available software to create a model that could be shared by the contractor, steel fabricator, and erector.

Populous and structural engineer and design team member Walter P Moore knew from the outset that “an embedded and nontraditional design and documentation strategy was needed to be able to deliver the complex project in the 12-month construction schedule,” says Thom Chuparkoff, AIA, LEED AP, Lead Project Manager for Populous.

Populous and Walter P Moore implemented, shared, and tested Grasshopper, Dynamo, and Revit concurrently throughout the entire project. This process allowed the design to be automated and iterative to meet the construction managers’ needs and the subcontractors’ schedules.

As the project advanced, the Grasshopper and Revit models were transferred into Tekla software, which allowed for collaboration between the design and construction teams. Populous, Walter P Moore, Hunt Construction Group, Danis Building Construction, Banker Steel, and Structurflex were able to use the same design and fabrication models concurrently to advance the design and detailing for construction.

Rhino and Revit were used as the primary geometry modeling programs for the project. The roof and skin were modeled in Rhino, which is considered more dynamic for complex geometry. Rhino was also the common medium for collating digital models and coordinating between teams for interfacing and clash detection of fabric and steel. It was also used for studies of ponding and drainage of the fabric surface. Revit was used for all other geometries and full construction documents.

Grasshopper for Rhino was used in tandem with the Lunchbox plug-in to build the roof surface and subdivide the structure into trusses. The roof form was designed by Populous; then the Grasshopper script was worked on jointly with Walter P Moore to create the structure for the roof.

A Grasshopper script was used to write out point data to an Excel file to transfer geometry from Rhino to Revit for coordination and documentation. Then Dynamo was used to pull that data into Revit to build native geometry with adaptive components. As Walter P Moore was engineering the structure, Populous used this workflow to represent the structure in the Revit model and drawings.

Kangaroo, a form-finding plug-in for Rhino-Grasshopper, was used in the early stages of the job to quickly study design intent. The structure could be updated as programmatic and functional directives changed the roof form. The base input for the script was 13 input curves that could be manually adjusted in Rhino.

Tekla was used to communicate the full steel package and connection details with the steel contractor via the 3D model. This enabled the seamless transition from CDs to shop drawings and fabrication.

Reality Simulation: Does it help to get an idea of the final product?
80
4/5
Waste reduction, labor costs and deviations
80
4/5
Greater control of the construction process
100
5/5
Improves collaboration between agents
100
5/5
Conflict resolution and clash detection
80
4/5
Correction and error handling
80
4/5
1 user liked this
+ Post a case study

Louis Vuitton Foundation: The Construction of a Masterpiece

BIM use in pre-existing structures with maintenance requirements

What can Structural Engineers gain from using BIM services?