The initiative seeks to rank Dubai as the smartest city in the world using state-of-the-art techniques for achieving distinctive government performance. 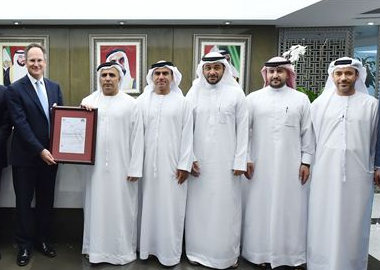 Country: United Arab Emirates
The Roads and Transport Authority (RTA) in Dubai has been awarded the Building Information Modelling (BIM) certification by the British Standards Institute (BSI), rendering it the first government entity in the world to obtain the (BIM Kite-Mark PAS 1192-2:2013, BS 1192-4:2014 and BS 1192:2007).
HE Mattar Al Al Tayer, Director-General and Chairman of the Board of Executive Directors of RTA, accepted the certificate from HE Philip Parham, the British Consul General in the UAE.
Al Tayer expressed his delight to see the RTA obtaining this certificate, which reflects the endeavours made to nurture an advanced asset management environment. “This certificate prompts us to enhance the effective communication between RTA’s officials and entities of relevance to our scope of business. Thus, it paves the way for taking non-conventional decisions and assists us in realising our interests in a short time in line with the Smart Government initiative.
The initiative seeks to rank Dubai as the smartest city in the world using state-of-the-art techniques for achieving distinctive government performance.
Attendants in the event included Nasir Hamad Bu Shehab, CEO of Strategy & Corporate Governance Sector; Abdul Mohsen Ibrahim Younes, CEO of Rail Agency; Saeed Al Ramsi, Director of Asset and Abdul Rida Abu Al Hasan, Executive Director of Rail Planning and Projects Development in addition to a host of officials from RTA Asset Department and the BSI.
“RTA’s achievement in being the first government entity in the world to obtain this coveted certificate is a testament to the implementation of the top practices of Building Information Modelling in a creative style that cements RTA’s leading profile across the nation and the world over in the implementation of this system.
This certificate is a true reflection of the advanced level achieved by RTA in Building Information Modelling over the past three years in terms of carrying out the analyses required, developing viable strategic plans & manuals, and the starting of the practical implementation of the BIM in several strategic projects,” said Al Ramsi.
It is noteworthy that the Chairman of the BSI and the specialist assessment team have recently visited RTA and met with  the team tasked with the implementation of the system. The team briefed visitors on the detailed procedures of the system application and responded to their queries.
The assessment team then carried out a comprehensive assessment of procedures applied by RTA over five consecutive days.
Following the full assessment, the Chairman of the BSI reported that the implementation of the BIM at RTA was of high standard, and the assessment team hadn’t detected any lack of conformity in RTA’s system.
At the conclusion of the complete assessment, RTA topped its efforts with eligibly obtaining the certification of the BSI for the design & implementation stage.

ArchiCAD VS Revit.Which Software to Use for BIM ?

BIM is one of the most popular topics in construction. We can define it as a process helping us to manage complexity and improve performance in construction projects.

Women and BIM: an increasingly common combo in construction

What does an industry need to become a digital industry?