How can Construction and Blockchain help the Industry?

How much different do you think things are going to be in another five years? 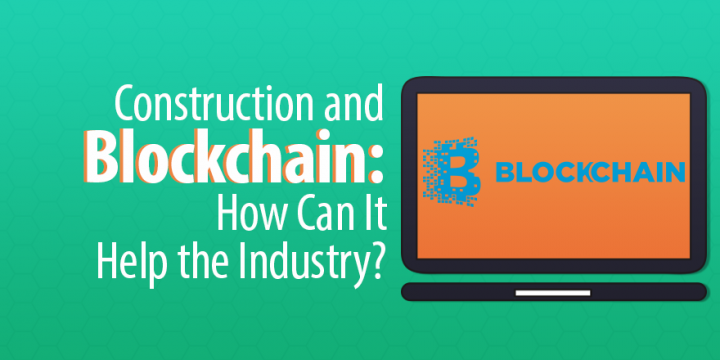 Country: India
Paying attention to what’s hot in the construction industry just makes business sense when it comes time to determine where you’re going to focus your resources in the long term. One trend, in particular, has earned quite a bit of buzz recently because of just how huge it could be in the next five years: the blockchain.
Never heard of it? Don’t worry, you’re far from alone.

What is the blockchain?

The blockchain started with the popular cryptocurrency Bitcoin. It allows digital information to be distributed but not copied or altered, something that was originally designed to create Bitcoin but is now being modified for other uses in the tech community.

Typically, data is stored at a central location which can be accessed from various points. That creates a security problem because then transaction data could be altered by a hacker who is able to breach the system.

The blockchain is different, however. It is a database of every single transaction that is shared on a peer-to-peer network. It’s basically a permanent chain of transactions that are grouped together in blocks and synchronized worldwide so that the blocks cannot be altered once they are added to the chain. It makes the chain of transactions publicly verifiable and totally unhackable.

Google Drive has a similar method of storing data. Traditionally, you would have to send a Microsoft Word document to another person and wait for them to make revisions before you could see the new copy. Instead, Google Drive allows multiple parties to have access to the same document at the same time, making edits in real time and being able to see each others additions. Some malicious individual could wipe out everything in the document, but it could just be reverted to a previous version instantaneously.

How do the blockchain and construction mesh?

Pretty cool, huh? But then again, how is that really relevant construction managers?

As an industry with so much money at stake and so many complicated moving parts, the construction industry endemically suffers from disputes and litigation. Many times, things like payment terms, confidentiality, and other important stuff are outlined in a contract. But disputes often arise over the stipulations of the contract. To avoid that, blockchain technology could be used to produce things called “smart contracts.”

Smart contracts would have instructions embedded in a transaction so that unless the instructions are fulfilled, there is no payment. This ensures all parties are happy and that no one is having to chase people for payment, virtually eliminating payment disputes.

How does the blockchain come into play? The smart contract is visible to all users in the blockchain, so there’s no question about what the terms are and what instructions need to be followed.

How can the blockchain benefit you?

If you’ve been in the construction industry for a while, you’ve probably dealt with more than your fair share of disputes. And most of them probably had to do with a payment.

Construction projects are complex beasts with lots of things going on and lots of parties involved. That means multiple contracts, with some that are multi-faceted or last for a different stretch of time than others, so it’s not always straightforward on what the conditions are for payment and whether they’ve been met. That’s when costly disputes arise, setting your project back and just generally giving you headaches.

Ideally, the blockchain could help you avoid payment disputes by allowing you to create contracts that force the parties involved to move through a certain checklist before being paid, giving you control over the payment process so everyone is on the same page.

How can you use the blockchain?

Despite the exciting promise of the blockchain, it’s not clear exactly how smart contracts would work with building information modeling (BIM) software, at least not yet. The technology is quite new, after all.

The problem is the blockchain, and a related concept known as the Internet of Things, is probably a few years away from wide-scale application in the construction industry. You’ll need a special IT platform in order to manage the devices and connect them to the backend. Some bigger companies like Amazon, Microsoft, and Cisco are creating their own IoT and blockchain platforms, but the technology is mostly out of reach for independent construction companies at this stage. The blockchain currently only has 1% market penetration, says Gartner, classifying it as an “emerging” technology.

When it comes to the blockchain, it’s not that the technology isn’t ready, it’s that it will take a big culture change for construction managers. As AEC Business notes:

Software developers and cloud service providers will use these platforms to create industry applications. So far, we haven’t seen many developers targeting construction. Blockchain is not technically hard to apply. However, there are many practice-related hurdles to overcome before it breaks through.

So while we’d love to share with you a number of easy construction management software options to implement the blockchain in your business, the reality is it’s not ready for prime time yet. But the blockchain is definitely a topic you’ll want to pay close attention to in the coming years, as it could have a huge impact on the future of contracts in the construction industry.

Undoubtedly, there are at least a few of you who know all about blockchain or have actually seen it in practice. We’d love to hear what you think about this up-and-coming technology, and how it has worked for your business, in the comments below. And if you’ve got a few tips for construction managers who are interested in smart contracts, well, that would be even more awesome.

Is there some software out there that uses this concept? Leave a review to let other construction managers know about it!

Innovation and efficiency are the key words of this technology. How communication between devices reduces costs and offers bette

Security in work through BIM

The BIM methodology has begun to revolutionize all the architecture, design and construction industries in Colombia

EsFAB is constituted, the Academic network of BIM in Spain

The initiative starts with the support of the Universities of Seville, Politécnica de Valencia, Europea de Madrid, La Laguna and