BIM as one of the Trump's infrastructure policy cornerstones 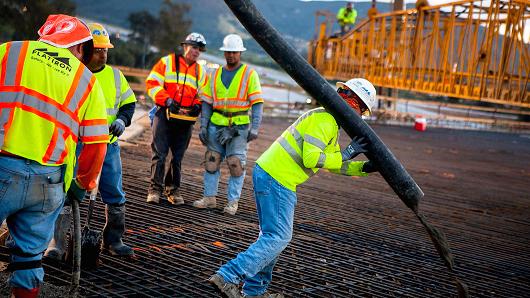 Country: United Kingdom
It is no secret America's infrastructure needs some big-league updates. And it's no surprise President Donald Trump made infrastructure one of the cornerstones of his State of the Union speech.
The American Society of Civil Engineers estimates the nation's highways, bridges, ports, railways, airports, schools, and energy and water infrastructure will require an investment of $4.6 trillion through 2025 to keep the U.S. economy competitive, a daunting figure when you consider the projected funding shortfall of $2 trillion.
In the coming weeks, Congress and the administration are expected to tackle infrastructure modernization in a difficult fiscal environment where government must extract the maximum value out of every single infrastructure dollar invested in order to meet this funding gap.
Associated Builders and Contractors will be recommending ways the White House and Congress can find innovative and effective solutions to finance and improve our nation's infrastructure and maximize investment for hardworking Americans.
Here's how we can accomplish this goal.
First, lawmakers and regulators must capitalize on Trump's August 2017 executive order speeding up the permitting process for infrastructure projects while continuing to respect sensible environmental regulations. It shouldn't take more time to get a project approved than it does to build it. Regrettably, the median time to complete an environmental review process of complex highway projects is at least seven years, according to a 2014 report by the Government Accountability Office.
The executive order's goal of establishing "one federal decision'' for major projects and setting an average two-year goal for permitting of construction projects will be a welcome relief to industry stakeholders. Providing timely approvals and certainty for a project's construction timeline will increase competition and drive down costs.
Second, faster project approval will also attract private investors, increasing the use of public-private partnerships (P3s) that can help bring mothballed construction projects to market in a more economical and efficient manner in certain circumstances.
For example, P3s can enable stakeholders to minimize risks and finance and plan a project's entire construction and life cycle costs upfront, rather than exposing an asset to fragmented and inadequate funding for operations, maintenance and repairs.

Third, addressing America's skilled-worker shortage and supporting vocational and technical education should be another critical component to any infrastructure package. A rapid increase in construction demand spurred by GDP growth and an additional $1 trillion in infrastructure spending over the next 10 years will further exacerbate the current shortage of skilled professionals the construction industry faces, from approximately 500,000 people to more than 1 million people.
Trump's executive order and task force on expanding apprenticeships are a good start. More must be done to encourage apprenticeships and vocational education and promote innovative private-sector workforce development programs that address glaring skills gaps, attract new talent and meet the immediate and long-term workforce demands of industry and the marketplace.
Fourth, regulators should embrace building information modeling (BIM), drones, pre-fabrication, automated construction, 3-D printing and other emerging technologies needed to improve industry efficiency and reduce costs, instead of allowing red tape to strangle innovation in its crib.
Finally, government must eliminate or rewrite antiquated, ineffective and costly procurement and employment regulations that are a drag on America's infrastructure investments and its modern economy. Numerous regulations unique to the construction industry discourage competition and steer contracts to special interests at the expense of small businesses and local companies that can deliver to taxpayers the best possible product at the best possible price.
For example, President Trump should rescind a failed Obama administration policy, Executive Order 13502, which encourages the use of government-mandated project labor agreements (PLAs) on large-scale federal construction contracts and permits their use on federally assisted projects procured by state and local governments.
Government-mandated PLAs force contractors to hire unfamiliar labor from union hiring halls and require nonunion construction workers to join a union or pay union dues as a condition of employment, which discourages competition from qualified American businesses and the 86 percent of the U.S. construction workforce not affiliated with labor unions. Research shows PLA mandates increase the cost of construction by 12 percent to 18 percent.
In contrast, a total of 24 states have enacted policies encouraging fair and open competition and the federal government should follow this example. It would be a win-win for taxpayers and the U.S. economy if lawmakers supported an inclusive policy so all Americans and all qualified companies can truly compete to make America's infrastructure great again at a price that is right for taxpayers.
A winning plan must adopt these policy cornerstones in order to efficiently and effectively modernize our infrastructure and drive economic growth and prosperity for all Americans.
Commentary by Ben Brubeck, vice president of labor, regulatory and state affairs for Associated Builders and Contractors.

The logistics park, developed by Onilsa, has been designed entirely in BIM