The future is the data that allow us to develop technologies to technify the world of construction. 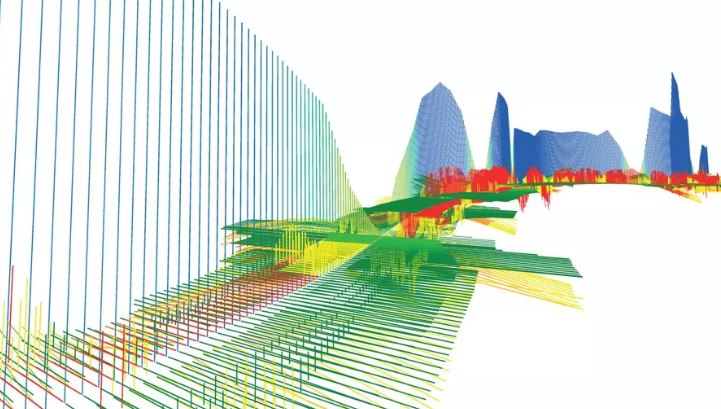 What is Automated Design?

They are the body of knowledge, theoretical and technical documents and digital tools created by Bryden Wood, as the center of its theory and practice, working in the direction of working for the industrialization of the AEC (Architecture, Engineering and Construction) sector. We currently have a presence in the United Kingdom, Singapore and Hong Kong and Spain, and knowledge that can be exported to other European countries.

Bryden Wood has been part of working groups such as the BIM Task Group, which, together with the UK government, some private companies and the University of Cambridge, for the definition of BIM standards in the UK.

It is now part of the Construction Innovation Hub group to define the standards for industrialisation in the UK. As a result of this, the following documents have been published:

It is one of the concepts we use a lot, especially in the design of technical buildings such as data centers, or industrial plants, with a very high content of facilities. We are able to group in packages of facilities with a certain and variable properties (volume, power...) as if they were mega families, to be able to make iterations or different versions of the design in a fast way.

The Platforms concept we use, "Platforms", identifies very similar characteristics in different building typologies, such as floor heights and structural lights in schools, residential, offices, hospitals, to define the kit of standardized parts that can be used for the construction of assets in multiple sectors.

These parts are readily available from existing suppliers and can be easily and intuitively assembled in countless ways to sustainably create a wide variety of spaces.

The use of repeatable components across sectors creates the economies of scale that have enabled manufacturing sectors to continually reduce construction times and costs while increasing safety, productivity and quality.

For our concept of Automated Design, the BIM model is not the center of the whole, it is just one of the parts of a whole. At the center is not the BIM model, but the Data Lake, on which other fundamental aspects depend, such as IoT, Generative Design, Algorithmic Simulation, Mathematical Modeling , Geo-Spatial Analysis, Digital Manufacture, Virtual Reality and Augmented Reality, and BIM.

One of the examples of Automated Design is the Prism platform. Prism App was commissioned by the Mayor of London along with Cast Consutlancy from Bryden Wood. 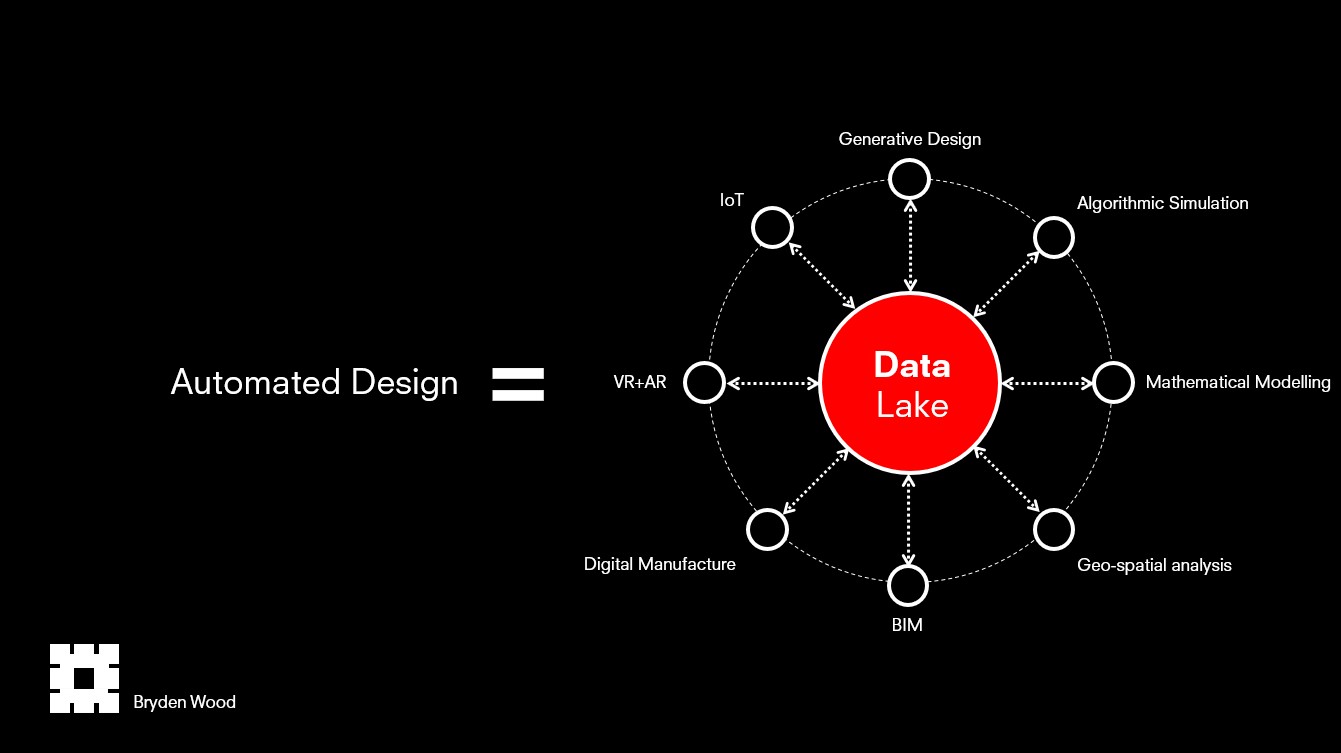 It is a free, open-source online platform, which can be tested here.

The objective of this platform is to bring the world of prefabrication closer to designers, with the aim of building the 50,000 homes that are needed in London over the next few years.

What this platform does is, gathering information from:

- Big Data: Analyzes the existing public and free data on the residential construction market in the Greater London (Metropolitan Area of London): Number of houses, size of houses, number of bedrooms, size of rooms...).

-Properties of the housing prefabrication systems . The most important manufacturers of various facade systems and structures were gathered and the technical properties of each of them were collected.

Information was collected on the urban standards of each of the areas of London. This was possible because the standards are "Machine Readable", they are easy to read by machines, i.e. they are relatively simple, not full of contradictions and specific assumptions. 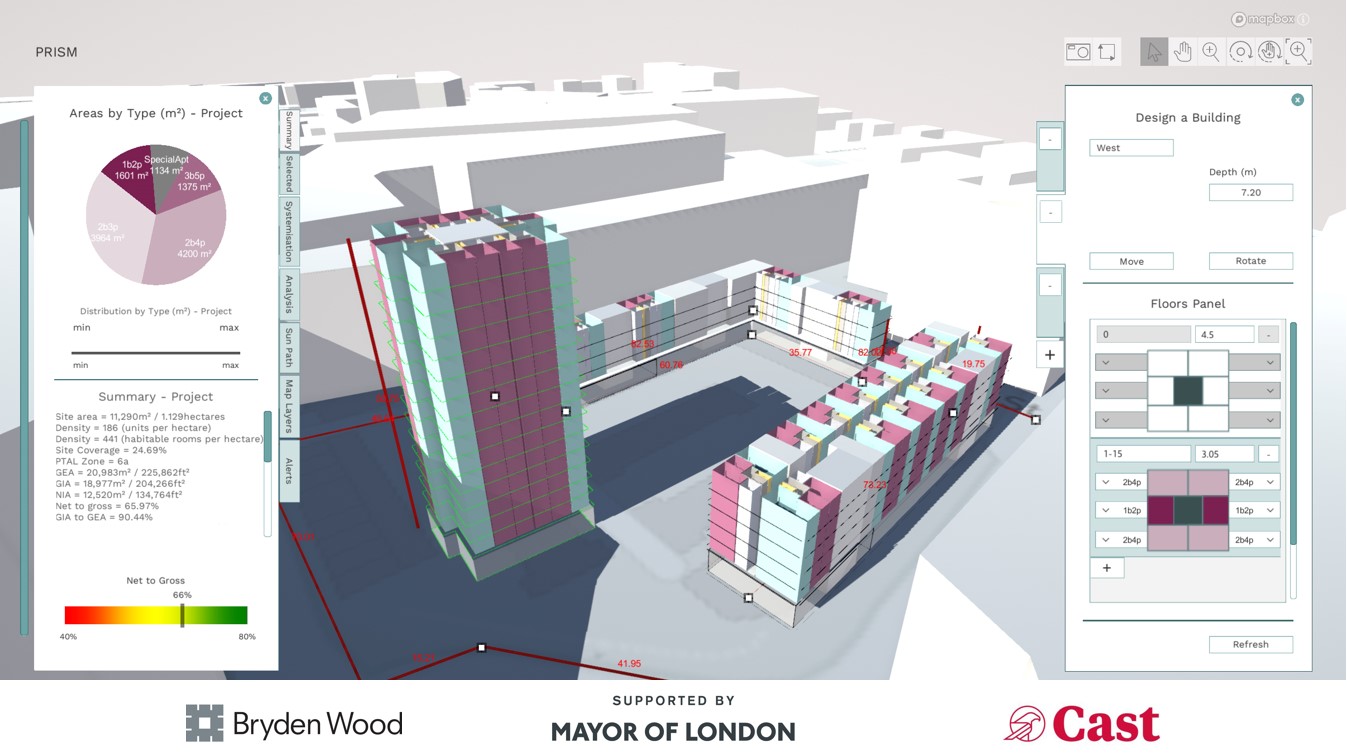 What the app does, which is developed with Unity, and is open source, is to put these standards and rules in a mixer, is a database, in order to generate what we propose in a given site.

The first thing is to select a site (at the moment only London is available). We select the type of building (linear, tower ..), the number of floors, the size of housing approximate (proportion of housing 1,2,3, bedrooms).

We will design a building, the app will propose a distribution, which we can modify, as well as the predetermined sizes or distributions of the houses.

A functionality of the tool is that it indicates us with a traffic light code (green, yellow, red) the suitability of each of the prefabrication systems for the design made, that is, if what we have designed (in a few minutes, given the operation of the app) is suitable to be manufactured with this structural system of this company, but not with this one, etc.).

Once the final adjustments have been made, we can obtain information about the final model, and export it in Revit model format, which would be a preliminary project.

This other web application, called Seismic Schools, is very similar to Prism, shares a large part of its DNA structure, is cloud based, Open Source and has a similar functionality. A site is chosen, a grid is applied, the characteristics of the school to be designed are defined, and modules are started to be placed, of classrooms, dining room..

It has an aesthetic for children, like the video game Minecraft, and is easier to use. Regardless of the aesthetics of the game and the ease of use, each of the modules, or classrooms not very defined in the web platform, has its twin high definition, with its Revit models by discipline, with all the meetings detailed and defined, totally prefabricated.

You can test it here.

This is a project for HighWays England, Motorways of England, who commissioned us to make a component library, which we did. In addition to this library, we made a digital strategy, which REM is the fruit, made two years ago. We have just made for them REM 2 and now we are in the third version of the platform. 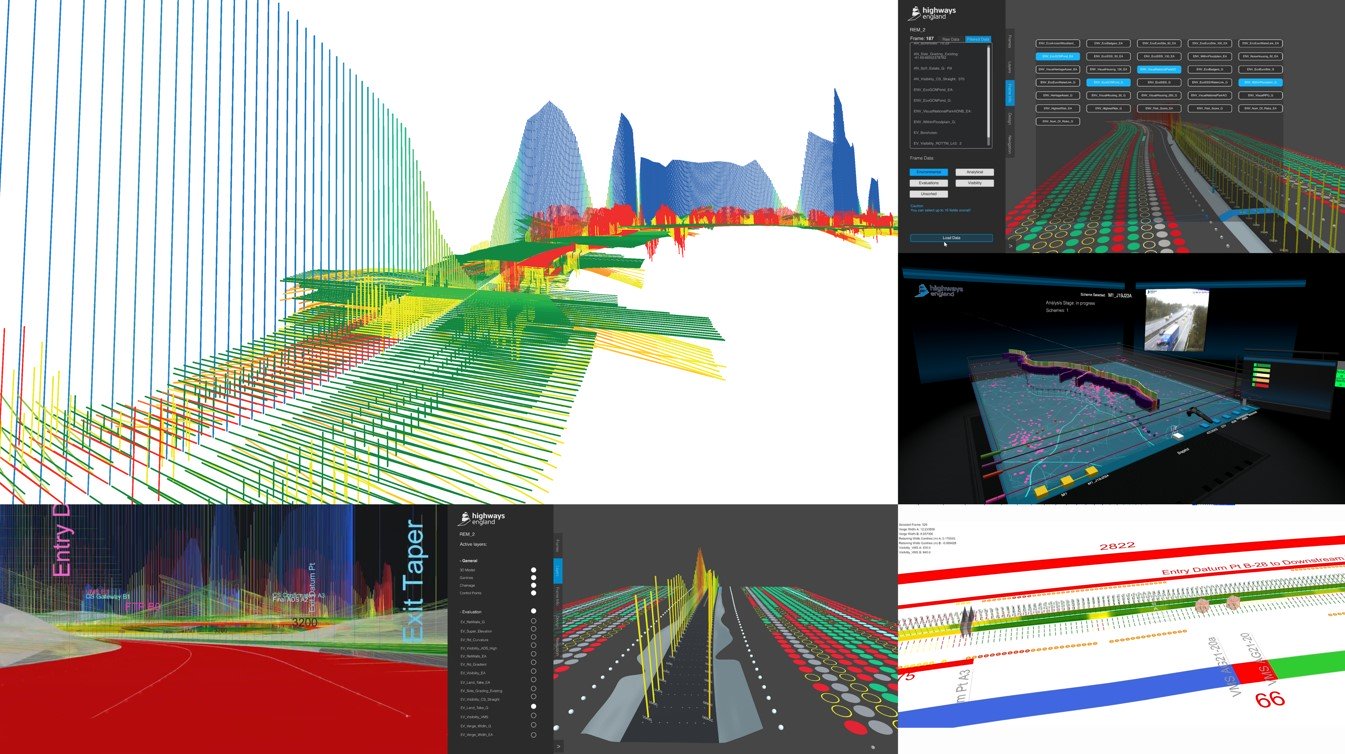 It is Automated Design, because as in the other cases, it is to obtain the design norms of the standards of the highways, and then in several sections chosen of the existing network of highways, with the information obtained for those sections, (planes, aerial photos, maps, LIDAR...) environmental analyses have been made (visibility, noises, flora, fauna. ) and topographical analyses (danger of curves, camber, gradients, cuttings...) with several iterations, fine-tuning each time, resulting in a lightweight data map.

All are data, lines, numbers, it is not a heavy model). It proposes areas of improvement, proposes the location of elements such as signs, beacons... It also has an automatic tool for the creation of earth retaining walls (since it has the existing topography and the measures of the necessary wall) and the automatic design of the structures of the "gantries" (signs and light panels).